And now Patch 8.3. is officially done:

As with Uldum Accord, it also felt anti-climactic. Of course the reason is that all work in the raid is done long ago, and grinding up reputations in the aftermath was pretty vain.

The patch in whole was not that bad. We had an excellent albeit a bit overtuned raid, a great story binding to former zones of Uldum and Vale, small story vignettes for every creature invasion type, growing up a mount and a Torghast test-drive called Horrific Visions. The latter was obviously more useful for developers and for Shadowlands, but us players also had our share of fun there, and for a test-drive the system seemed quite transparent, logical and fun.

On the downside the open world content became quite repetitive in several weeks – and with no significant and inspiring goals or rewards to grind it through. Achievements are probably the worst – Mechagon-style grinds of popping 1000 of this and killing 250 of that, not even close to Nazjatar’s or Kul Tiran/Zandalar’s true exploration and variety.

And apart from catching a serpent with Zan Tien lasso I have in my bags, the patch and the expansion are over for me and my toons.

My subscription ends tomorrow, but do I renew it? By Gnomeregan, yes!

This is the current sheet of my transmog sets, Vanilla to Cataclysm. In the past weeks I deliberately omitted the Pandaria+ raids and decided to focus on the earlier ones: 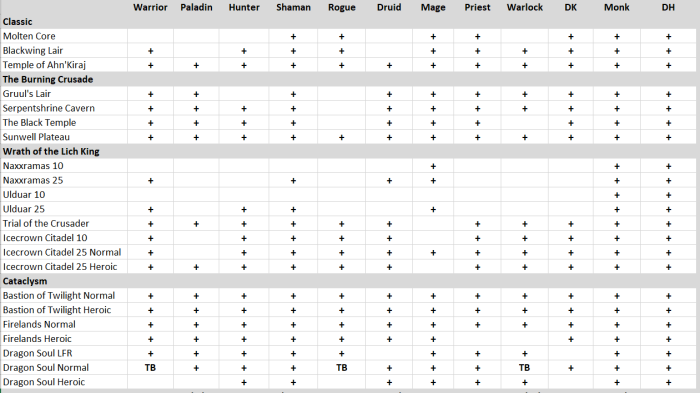 Points of hate are very much same:

Vault of Archavon access must be available to all factions all the time except actual battle. Pleeeease!

Ulduar and Naxxramas still require said Vault of Archavon – up to 3 pieces per set, and there are 10 and 25 difficulties. Oh, and items are class bound: your druid can’t help uour rogue etc.

I hate Karazhan – not for Chess Event, but for running. If you’re hunting Gruul’s Lair helm, you must kill only 5 bosses: Moroes – Opera – Curator – Chess – Malchezar, but it’s an insane amount of legwork.

Same thing for Ulduar. It’s quick, but quite annoying for its legwork.

I hate Battle for Mount Hyjal because… you’ll know if you’ve been there. It’s a torture for warlocks and rogues – no wonder they are the only ones to finalize Black Temple sets. Procrastination!

I hate grinding Icecrown Heroic belt for mage in Legion’s version of Violet Hold dungeon – it’s the only place where you can get it. Good luck first fishing out Shivermaw, then getting a drop.

In a similar fashion, my paladin now is doing Molten Front dailies… to finalize her Ulduar set. Yes, eventually there will be a dwarf NPC which sells the two remaining 25-set pieces. Also a belt from Ulduar 10 doesn’t drop in Ulduar, but rather from ogres in Warlords of Draenor. I’m saving what remains from my sanity, and NOT grinding it – just checking AH now and then.

I’m planning a couple of posts someday soon: on my current alt roster (which is insane) and a thorough final review for the whole expansion (don’t miss it if you’re looking for a positive approach!).