With small folk preparations off my shoulders yesterday, I devoted a couple of hours to major questline in the morning with my main. And here’s what I saw and experienced.

LORRRRRRE!!! I’m savouring every quest, thoroughly reading every line and taking my time to get to places. There’s absolutely no rush, and I’m having extreme fun!

Lore is great, really. The questlines gently take you through the story, while organically introducing the gameplay systems at the same moment. I’m happy to learn about the new factions of mogu and tol’vir, the turmoil of aqir and mantid driven crazy by their masters of old. It’s so awesome to experience the sequel of the MoP and Cata stories!

I haven’t advanced too far in terms of story: I have completed tasks in Uldum and proceeded to Pandaria. I went on standby with Pandaria assault done, and Ra-Den quest waiting to be turned in. Just so excited to see what happens next!

Revisiting Halls of Origination dungeon in full during scenario was amazing!

Magni though! This hammer thing is awesome, and finally he fusses around with us in person. I think they did that because his briefings for world quests were so annoying. Don’t talk, do something, speaker of Azeroth! Wrathion is fine, I like him in general.

New patch = new scaling. I call this “penetration threshold”. Like world quest “bosses” in Zandalar or Kul Tiras won’t even scratch you now, but even a couple of the new common mobs is a problem. It’s not even your fire power, it’s how hard they hit, and that depends on ilvl of your gear. I died, and I will do so again.

Mobs are actually awesome! It’s cool that all of them have those dangerous special abilities, and you have to deal with them. I’ve yet to learn how specifically dangerous each of the mob types is. So far, flesh crawlers are the worst story for you: they will chomp you alive in a matter of seconds! 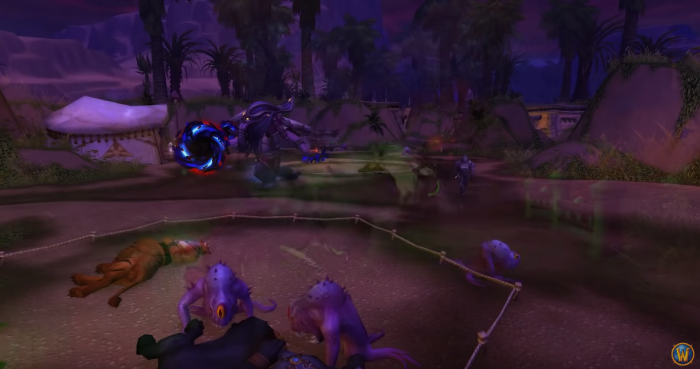 You can still complete the assault if killing mobs takes you forever (healers or tanks): you could just click the interactive items and succeed without a single kill!

Void worms! They float quite fast, and I need to learn to keep an eye for them. So far I’ve learned to travel lower than usually. They didn’t kill me yet, but I got a couple of warning debuffs.

No world quests? So far I’ve seen dailies and/or weeklies. There are lots of fun events too, I’m eager to do them.

I’ve got some insane amount of coalesced essences – like 6k or something. And I haven’t even started any farming.

I’ve got 2 corrupted pieces I can’t wear. I absolutely require to cleanse them first, and currency for that comes from Horrific Visions. Also got two blue plate armor tokens from drop/chest and sent them to my death knight :)

Corrupted pieces are 440 (wow!) and token gear is 415. Good news: they DO count into LFR sets, so I’ll probably go there for weapons only, not armor transmogs or gear upgrades. It’ll be extremely fun to complete a raid collection achievement in the open world!

Speaking of new achievements: they are scarce. No exploration at all (killing rares or something), and only 4-5 quest achievements: kill N’Zoth, destroy 7 maws (I did one, was extremely fun!), cope with 3 and 3 assaults.

I’m eager to explore further! So far it’s great lore, engaging activities and a proper challenge for a squishy mage, which doesn’t seem overtuned or excessive. I just need more experience to succeed!

P.S. If you’re Horde, you may encounter the most amusing dialogue at Orgrimmar auction! A former Sylvanas supporter is being shooed away by auctioneers :) Then another auctioneer tells him: he was mistaken, he’s good now. And then he tries to sell his stack of 20 anchorweed… placing 20 separate weeds. Made me smile a lot :) It’s a mild invitation to check the new auction, and amusing in so many levels.