Just a streak of things going on in my camp.

Backston is 87 and is leveling now through Hyjal questlines and Pandarian dungeons. I’m expecting her to enter Legion leg during weekend, or maybe even finish the whole legacy armor endeavor? Not a second thought about character deletion at 110. I’m happy with my excellent Highmountain druid, and I don’t need a doppelganger. Besides, Balance is the only fun spec for me, so.

While leveling bonus is active, I’ve decided I bring a death knight into the fold – the only class I don’t have now. Moreover, the new expansion is very likely to bring them forward, and I’ll want one anyways.

I’ve scrolled through the available races, and picked a human. Managed to find quite a normal skin tone for her – this is imperative, because I can’t stand the greenish corpse color (certain IRL memories are not quite something I want to bring into the game). Also I’ve picked the most tender face option to mitigate the brutality of the class.

Name’s Gaella, and she’s obviously Frost. Level now is 62 after completing the initiate storyline, picked Herbalism and Mining to aid other toons with their professions and level faster.

The funny thing is, I already have her transmog on and ready :) I may play a bit with the raid sets at 120, but all in all the starting set is my DK favorite.

I am not intending to be a completionist with her in BfA content. Just what it takes to level and gear up for 8.3., and we’re good.

First of all, if you want your AH Brutosaur mount, you’d better buy it now. It’s gonna disappear in Shadowlands from vendors, and will only be available via Black Market.

This has little impact on me. I don’t mind a small trip to the capital once in a while, and I never use AH actively anyways – just occasionally. Also I’m always struggling to get gold, and right now, among a dozen of my alts, I guess I don’t even have enough cash for a Mechagon 400k flying machine.

If you manage to buy the dino before Shadowlands, it’s also a Feat of Strength for you!

Second, your well-earned legendary weapons, like Azzinoth blades, Thunderfury, Pandaria capes etc etc will be available for transmog. I own a number of them, and it’s a piece of good news.

Third, cosmetic C’Thulhu masks come as the transmog options. Many recolors, so your inner Lovecraft should be happy: 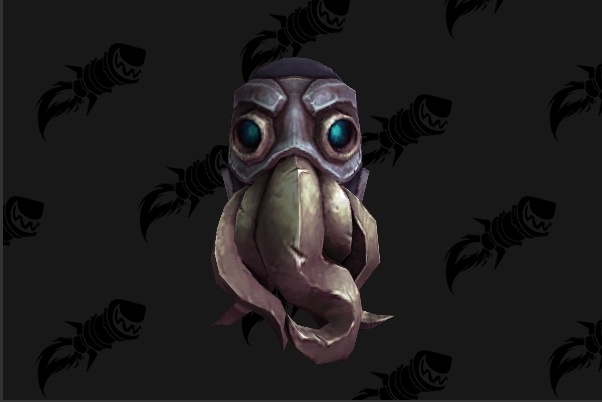 Fourth, loot table for the Ny’alotha bosses now looks like this:

It’s a nice and palpable upgrade from the previous tier. As my toons are sitting at ~410 nowadays, they will be happy to get this boost for their endeavors.

Five, a new Honorbound/7th Legion warfront mount will be available for 350 medals. Yet it comes with a condition: you’ll have to complete Darkshore on a Heroic mode.

For the Alliance, it’s a recolor of other Darkshore cat mounts, so I think I pass on that. I’ve got the perfect Darkshore warfront cat model mounts already, so one more grind and a non-queue warfront seem a bit excessive.

Six, vulpera have got an awesome racial perk: their basic backpack will be bigger for a mighty number of 8 slots! A bliss for raiders of old content, and one more bonus for my planned race swap :)

I guess this is it for tonight. See you on the other side of the weekend!