I am quite careful not to discuss or even read datamined story dialogues – it is much more interesting to wander the speculations field instead.

One of the interesting datamined things are the new DK blades:

The blades require level 58, so they are definitely:

This is another brick in the wall of death theme and Northrend prediction, and opens new field of story speculation. Before we proceed, here’s another datamined thing – a portal to Frozen Throne: 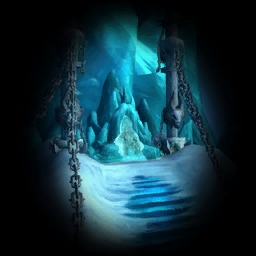 This is even more interesting, as portal means that it’s a) stationary/summoned by mages and b) is a place where we will get to return very often.

I presume that Bolvar could be a good guy after all? It is unlikely that we will have a Lich King faction station in the throne room itself (imagine a zoo of the undead vendors and dozens of players at the dance floor). Yet it could be the place where we will return often for briefings and talks. Also, the portal may not imply the throne room, but rather the Citadel premises in general.

With Dalaran gone, we will need a new hub. Could it be Icecrown Citadel then? The idea of Sylvanas attacking Northrend in an attempt to take control over the Scourge, and Bolvar fighting back with the help of players seems more real now.