Blizzard have posted a complete list of patch updates, and it seems that release date is very much at hand.

Anniversary event: Memories of Azeroth. Like in Molten Core voyage during WoD, we’ll be able to queue via Raid Finder and see 9 iconic bosses from TBC, WotLK and Cataclysm raids. This is naturally split into 3 wings, and upon completion we get Memories of Fel, Frost and Fire achievement with a Deathwing mount as a reward. 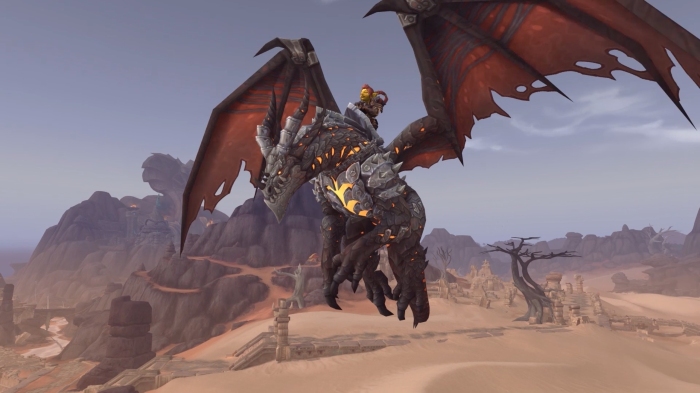 I haven’t managed to kill all those bosses live – I believe I first tried raiding in Dragon Soul, one or two bosses. So it will be an awesome experience. Entry item level is 380.

Alterac Valley reboot – well, you know where to shove PvP :)

Timewalking Firelands Raid: no, I’m not doing it. Never been to timewalking Ulduar and Black Temple, never planning to go to any other old raids, unless solo and for transmogs.

Party Sync and Recruit a Friend: it happens so that all my IRL friends and family don’t play WoW, MMORPG, or don’t even play any games at all. Until I have an IRL friend willing to play, this news is a hard pass.

Goblin/Worgen Model Updates: yes, please! My couple of goblin girls are already stunningly beautiful, could I make it even better? I’d spend an evening in the barbershop.

Bee Mount for the Alliance: I’m eager to get it!

“Tensions continue to rise between Saurfang, Anduin, and the Banshee Queen Sylvanas. Discover the fate of the Horde and Alliance in the final chapter of the War Campaign.”

Calling it “tensions” would be an understatement. I’m very hyped to know how the arc ends. A couple of datamined cinematics of 3 and 6 minutes long looks as juicy as possible.

Here’s my call of what happens:

Blizzard clearly wants to wrap up the story arc before Blizzcon to announce 8.3. with N’Zoth raid and 9.0. with Bolvar the Lich King expansion.

Sylvanas is due to go – now. Granted we don’t get new warfronts, world quests or such, it will be a questline, culminating in dethroning of Sylvanas. I’d wager one of the cinematics is about the final spectacular confrontation – enter glorious Calia Menethil who will turn the undead against her and show them the way, and probably banish Sylvanas in a fight. The second cinematic will be making a peace treaty between factions, as well as assigning the new Horde leadership: trolls, orcs and the new warchief (Baine).

Hereby Sylvanas arc ends in this expansion. She’ll serve as a link to the 9.0., but we won’t see her again until pre-patch and/or revealing cinematic where she schemes with Bolvar – maybe also Helya and Gorak Tul? She has nothing to do with the Old Gods – she serves death, and promotes undeath as her perfect state of Azeroth. Kill ’em all! And raise afterwards :)

I expect two more cinematics at Blizzcon: a machinima revealing N’Zoth menace and inviting us to Nyalotha, and a proper cinematic cartoon showing us Sylvanas with Bolvar as a teaser to 9.0.

“With N’Zoth’s imminent emergence, you must seek help from an unlikely ally: the Black Prince, Wrathion. Level 120 players should seek out Magni in the Chamber of Heart to continue the story and discover the Black Dragonflight’s whereabouts.”

Dragon arc, carefully woven into azerite necklace leveling, will wrap up with 8.3. Dragons helped us to fight N’Zoth’s puppet Deathwing, now they step in once more to defeat the source of corruption, giving their scales to empower our necklace and heal the planet/titan.

Here goes another crazy idea: what if dragons in person help us fight N’Zoth, and hatched titan Azeroth will return their powers to serve as world wardens once again?

The patch is not about gameplay so much, albeit huge in lore. I expect that the 8.3. raid pops in January, and 9.0. in the next Blizzcon. For now, we are supposed to finish our Eternal Palace raiding, wrap up Nazjatar, Mechagon, all the little things, celebrate anniversary during after Blizzcon events in November, and play the reforged Classic and Warcraft III.

Breathe out :) We’re basically in a lull, but there’s gonna be a lot to discuss and lots of other things to do. I’m hyped.