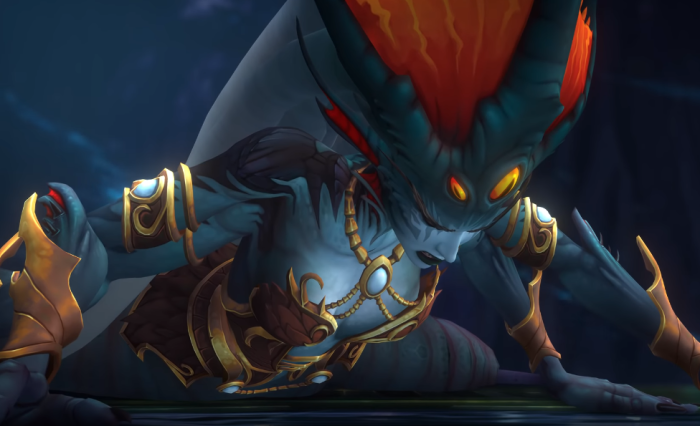 Well, almost :) There is one more kill scheduled for Pins’ quest, but we now need nothing from her! On the very first run during this cooldown Jagda the Dwarf Shaman has won the long anticipated caster staff.

The relief is huge, because it dismisses 6 of my toons from Eternal Palace duties – hence 1,5×6 hours in queues and the dungeon wing itself every week can be dedicated to other stuff. What’s left now?

And yet, I feel like the major job is done now, and these are only leftovers.

I would actually miss the encounter. It was quite brutal in the beginning, but during farm it has transformed into a quite exciting time spent in raid environment. Fewer people now come unprepared, and, while it’s not a sure kill in 100% cases, it is quite balanced and interesting to play through, more than possible to beat without determination stacks.

I take my words back: she’s not an eredar boss :) Probably she’s the best balanced final boss so far in the expansion: G’huun was a chaotic mess by the end, and Jaina is basically tank-and-spank if raiders remember about the ice wall thingie. Azshara requires precision and execution, while not turning battlefield into a lava pool or offering an insane gear/dps check. And that’s what makes her great.

Next time we will probably see her as a mid- or penultimate boss of 8.3. – a lot more dangerous and enhanced by the Void. What will it look like? We shall see.

Meanwhile, it’s time to clear Nazjatar and Eternal Palace from the remaining valuables. The storm has come and gone, and it left us united and ready for the Horde revolution. Now – down with Sylvanas!

2 thoughts on “Queen Azshara: Until Next Time!”