While I’m surely busy with alts in Nazjatar and Eternal Palace, it surely leaves me exhausted on the N-th run, and I need a change of scenery. So Classic serves as a nice distraction (as planned).

Saturday’s late evening allowed me to login on my character (The Character, how cool is that), and off I went.

I finally managed to scrape myself out of the starting Coldridge Valley area, and Dun Morogh was at my service. There are basically three questing areas – Gol’Bolar Quarry, Kharanos and Brewnall camp by Gnomeregan. I was ready for quests being different from post-Cataclysm version, I was ready for legwork and absense of flight points. What I was not ready for that quest number would be so scarce.

As far as I remember, there should have been at least a couple of hubs more – namely the ram ranch with a yeti boss, and something to do with dark iron spies by Loch Modan border. Nah, did not happen. Maybe I should look better, but no questgiver was available on my way. They just sent me to Loch Modan, and this is it. Where, by the way, quests are too high for my level now.

Loch Modan! This is why I play Classic in the first place: 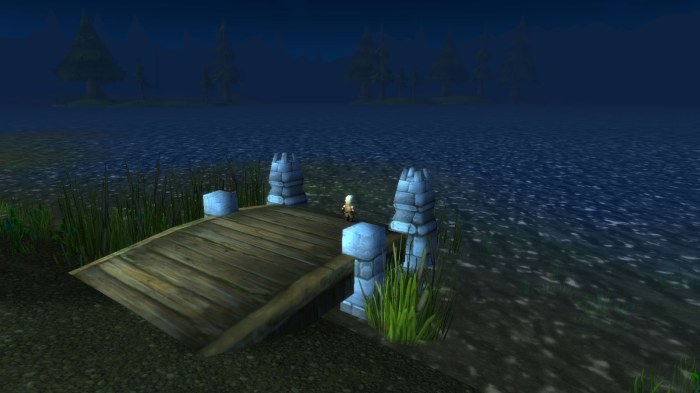 On the bright side of Classic, I am also excited to develop my character in many ways. Learning new spells and perks, and acquiring gear. Right now I’m all in white and grey stuff, not a single green item. This is a natural excitement of any new MMORPG and every fresh character, and Classic is definitely a new one. It was cool to buy and equip throwing daggers (200 in a slot!) for distance aggroing.

On the downside, the gaming process is grim, dark, and full of terrors. Mind you, I’m ok with the given inconveniences – like bag space, gold, walking marathons and all else. What I strongly detest are the quests’ execution and combat system.

Quests are a pain to do. Mob tagging, respawn and drop rates and ridiculous mob level range are pain. I was sent for 8 wendigo hides nextdoor, and it took me an hour to complete. I’m still struggling with the trauma of acquiring 6 shimmerweeds – it took me an hour break before I gritted my teeth and decided to proceed with them. You are struggling to tag at least one mob, and desperately run in circles, but then three will spawn on the top of your head -> cemetery run. It literally takes forever! You, as a level 6, are killing a 6-level mob, no sweat, but then a 7-level one will arrive and stomp you into the ground. And you can’t do anything about it: just helplessly watch. You can’t outdamage the mob – even potions and bandages won’t do the trick. Running away will get you dazed and killed even faster than face-to-face combat.

Speaking of combat: it’s clumsy, uninspiring, and ridiculous. I’m a rogue, so I’m supposed to open up from stealth with a backstab, which will give me some advantage. Lol. Mobs ignore your stealth. I’ve tried so hard to sneak from the back – but mobs are walking and changing direction all the time, so this is all in vain. It will say “Urrgh?” and then attack you from at least 15 feet – stealthed! Yes, mobs of your own level. The only way you can use stealth is sneaking at neutral mobs – which would not pay attention to you if you walked openly anyways.

Needless to say, this is pain. Those 9 levels are looking at you all traumatized and with tears and horror in her blue eyes:

Btw, in the first six days people not only reached level 60, but also already killed Ragnaros. 5 of them were not even level 60, because access to the raid is given at 55. So much for Classic being hard, and required gear with fire resistance, and what not :) The only hard thing about it is developers being new to MMORPG and introducing a clunky gameplay. How long people will be engaged there? We shall see.

P.S. I’ve met the best nickname for a long time: