Well, I’ve made it through the queues and entered the magic world of Vanilla on the final stress test day. 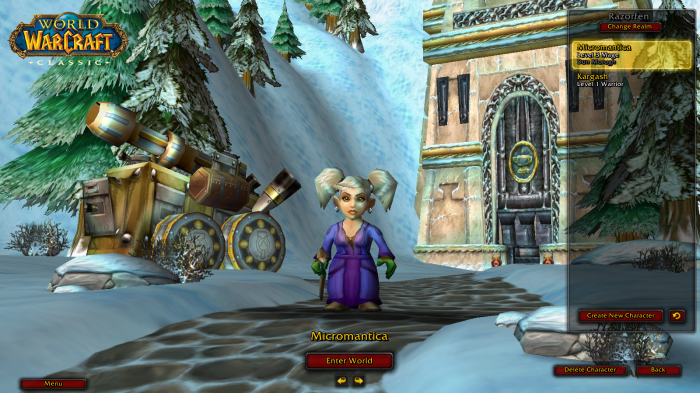 There were lots of people – the starting field was littered with wolf corpses that are the goal of the first quest. Still, the respawn was great, and I’ve managed to make it through several initiate quests.

Once the first excitement and adjustment was gone (Square asses! Gnomes were hunchbacks! Loot only by right click! You must drink after every mob! and so on), I’ve put myself on the questing rails – i.e., gameplay – and I didn’t like it. A lot.

My overall concern is: Vanilla is a waste of time.

I’ve killed 14 trolls (my, what a grind per single quest!), and then I got a quest to retrieve a stolen journal from “boss”. As I remember from WotLK routines, you should grind your way back into cavern through the very same mobs you just killed and find the “boss” there. I did so, and there was no boss. I waited enough for respawn, and nothing happened. I explored the open areas, and he was not there. The quest text is not specific about where he is. So I called it quits.

Lack of gold, battle systems, lack of bag space, a need to visit class trainer and everything else – I could live with it. What I can’t and will not tolerate in my game is wasting my time for “exploration” for a mundane task like killing 10 boars. I’m not spending my time on returning and killing same mobs over and over. I’m not spending my gaming time Alt-Tabbing to Wowhead, while quest directions are simply not enough. And this is just the beginning. They didn’t even send me to Kalimdor to retrieve a half of an apple or something.

Back before internet era, we’ve exchanged rare metal records on tapes, and later CD-Rs and DVDs. To listen to an album you should have arranged a meeting with your friend, travel half of town and bring it back home. That hardship definitely inflated the value of the album, even if it wasn’t that good by itself. Back then, you’d listen to it first song to last because you’ve invested your time and desire to get it. Today, you would stream a couple of songs and turn it off if it’s not good.

As much as you can feel “yay!” upon completing a simple troll-slaying quest, it’s not about how good the quest is. It’s not about challenge. It’s about relief after doing a grindy, mundane task.

Vanilla is not about adventure. It’s about endless run without sufficient clues, a long grind with little story. It’s 95% of travel time and 5% of actually doing something. And that’s just not my piece of cake.

Excuse me, but Nazjatar awaits :)

3 thoughts on “So Much For Vanilla”