It seems that Blizzard has seriously considered paying their debts for the absense of Gnome content in practically every expansion. And they delivered.

Mechagon adventure has started with an amazing opening sequence in Tiragarde Sound. The mysterious intriguing vault was finally opened – and how!

We’ve observed every gnome trademark feature – boldness, eagerness to go into experiments, tinkering, and all of this is very amusing to observe. Previously it has been just one gnome at most being weird. Now we got into a whole party of them!

While the tinker squad leader was in fact a bit annoying (and he caused casualties for almost all his party), I couldn’t help laughing with Gila Crosswires keeping notes :)

We’ve discovered the coordinates of the fabled island, which is conveniently just across the water from Stormsong Valley. A mysterious king Mechagon, the last king of the gnomes before democracy, has led a bunch of gnomes there and no one heard about them ever since.

New squad assembled (including Saffy and her partner in life, in love and in lab – goblin Grizzek), we set off to its shores: 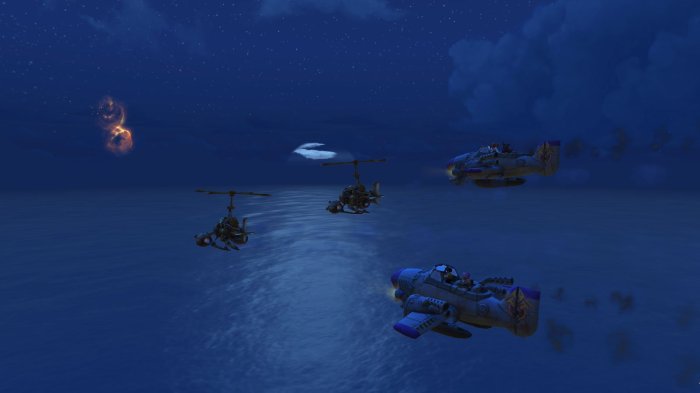 Air defense kicks us down to the shores, and we immediately get acquainted with rebellious Prince Erazmin, the son of king Mechagon. Oh, and a rival goblin party under guidance of Gazlowe arrives at the same time, also eager to learn about the island and see if they could use its secrets.

The story is quite simple: king Mechagon wants all gnomes back into metal – the form they have originated from. While all of them are not against turning into cyborgs, and “improving” their flesh by replacing it with mecha-parts, they would still like to keep their heads intact and personalities secured. That’s the conflict for you.

Mechagon isle is actually pretty small. There is only one flight path – which serves as an arrival point. As you can fly in from Stromsong Valley, there is no need for portals.

Blizzard has promised us that this will be more of a playground, and so it is. You’re supposed to run around, gather scrap from mobs, rares and occasional quests, and bring them to your base to tinker different stuff. And this is it!

I’ve done all yellow and world quests available so far, so I’ll be waiting for the next day. It seems that you’re supposed to gate your progress with reputation, and also world quests will give you a purpose to go on. I’ve explored all the island, and haven’t found any new stuff. It’s not like we need to grind the mobs for parts and quests without quests, right?

I’ve bumped into some mechanical gorilla, it required some mecha-beast item, so I went away. In the camp I discovered that I can craft and have mats for that item, so I tinkered it. When I returned back to gorilla, it was gone! I’m not sure yet how this all works :)

Anyways, this is what we need. With a grave and dark zone for the main story, a lighthearted distraction playground is exactly what is required to while away time. Maybe it’s like Timeless Isle, but with Gnomes! tinkering! collection achievements! What could have been better?

I’m amazed, but Blizzard once again did the trick and totally sold us the prosthetics as an awesome thing. My rogue even felt that she was… erm… too fleshy? It is safe to say that they will be an allied race, Ankoan won’t (no females so far, undistinctive customization), and for the Horde it’s either vulpera or gilbins.

Mechagon is definitely my daily hub because we need flights, collection achievements, story, and overall weirdness. But I think I don’t need all my toons there – in fact, one is quite enough, maybe a Hordie to follow.

Another chunk of Gnome content is a questline for their heritage armor.

It appeared to be quite simple. We get summoned to New Tinkertown (Gnomeregan) to supervise the production of the new airforce for the Alliance cause. First we assemble a team of three gnomes in the city:

Then we are sent into Gnomeregan itself for an engine prototype. We enter through workshop (back) entrance, and it’s a short walk in the tunnel where we kill a couple of spiders and watch our step for malfunctioning sparkling sentinels and steam pipes.

On our return, we get a distress call from Borean Tundra – Fizzcrank Airstrip, and get there on our own. On our arrival, we meet al the squad and almost ready brand new bombers. They give us a cannon for calibration, and conveniently there are troggs nearby which we need to kill.

The cannon really needs to be calibrated, as it can shoot metal chickens, or a bombshell, or something else. Of course we could kill troggs on our own, but it’s much faster and more amuzing with a gun :) Immediately after we dispose of a too-clever trogg which learned to ride a mechatank, collect an item from him and report back to the Airstrip.

A hologram signal reveals itself, and one of the rogue henchmen of Sicco Thermaplugg introduces himself and claims to conquer the world with his trogg army. That is not what we want, so our bombers set off to Storm Peaks where he sits.

By Thorim’s pillar the bombers need recalibration, and while the squad tinkers under a cover masking field, we can shoot the troggs for distraction (but mostly for fun).

All set, there’s finally proper bombing of trogg swarms in the Terrace of Makers, and then we crush right into Halls of Stone dungeon – remember it spawned troggs at the last boss? Exactly this room holds the mastermind rogue lepergnome in his exosuit, and after a quick fight we report back to New Tinkertown. Ta-da!

I liked the storyline very much. It addresses the major checkpoints in gnome history: their origins in Ulduar, the trogg nemesis, the rogue lepergnomes and Thermaplugg, re-visiting Gnomeregan, and all of this with lots of tinkering and fun.

The armor itself looks like a plate one… and it would fit a gnome paladin best :) Maybe Blizzard will listen to gnome community requests? Someday?