As we perfectly know now, Azshara didn’t kill us on sight – she’s planning to toy with us like a cat plays with mice. Why?

Here’s my speculation/prediction, and we will see if it’s true when we advance through the storyline and after the raid.

The cinematic shows us some void substance rolling around Azshara, and this is by all means a trace of N’Zoth. She deals with it as with a pet, and promises him to be released… soon.

I think that the answer is very simple. She needs us, and she needs our azerite necklaces.

Do you remember what we were doing since August? We have got an amulet, which was enhanced and infused by azerite power for almost a year. Magni – and later MOTHER -states that once it holds enough power, it will be capable to heal the titan herself. Imagine that power?

Or… it will be able to break the chains.

The chains of the titan origin which hold the Old God contained. Titan blood and titan power used to unlock titan shackles.

There were no other means to break him free. She had 10,000 years for that – an immensely powerful sorceress who blocks Jaina’s teleportation with a wave of a hand, who has a fiercely loyal army of followers, and an option to try and grab all artifacts in the world. It was not enough. Until now, when the titan blood spilled, and its power is conveniently concentrated in one place. In our necklace.

She will wait until we infuse our necklace with even more power… and bring it to her. Let’s take a look at the encounter area: 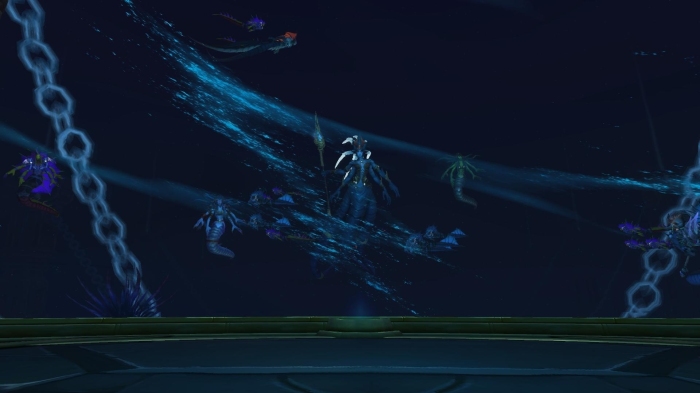 Have you noticed the chains? What do you think they mean? Well, these are the chains of N’Zoth prison.

So, once we bring the necklace to her, she will make us unleash the power to fight her sorcery. And this power is what will break N’Zoth free.

Basically… we did all the job for her, and all she needs to do is to collect the fruit. Not even collect: the fruit is ripe and will fall to her feet by itself.

Enjoy collecting your essences and Nazjatar! :)

One thought on “What Are Azshara’s Goals?”