I’ve always been a fan of smaller races in any game possible. No wonder that Gnomes & Goblins are a bulk of my toon roster – and they have been my only played races in the first 6 months of the expansion.

Yet, aside from my blood elf (because demon hunter), the last half of the year is bringing me a new drift. There’s no wonder that I’ve added a couple of Mag’har, because I’ve always cherished the uncorrupted, more spirited version of orcs, they were new, and they have gorgeous barbaric hairstyles.

Yes, Jagda can be explained alright, because she’s a Dark Iron – the only allied race that I enjoy playing and feel the bonds for.

I’ve added a gnome warlock to my roster, and a 5th gnome felt a bit too much in terms of face diversity, so I’ve race changed my hunter to a dwarf. The race choice was influenced by all the Vanilla talks – he’s the one that could easily be in the original WoW cinematic: 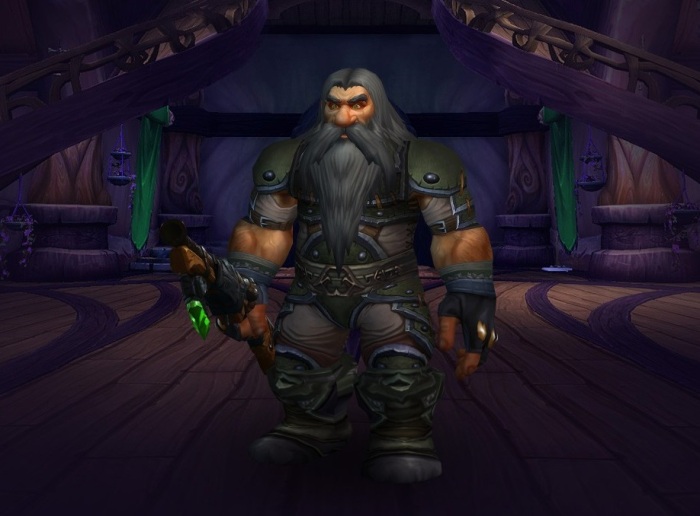 His persona is absolutely great. He’s a mountaineer, a tough guy who is used to be in the wilderness, so I kept him serious, a classic stalwart highlander/viking type.

It was a sudden inspiration to create this whole new mix. First, he’s a tanking paladin: I’d like to have an Alliance tank. Also I remembered my first days in WoW, in WotLK – I’ve rolled a gnome rogue, a gnome mage and a dwarf paladin back then. I just kept thinking of him from time to time, so it’s a nod to the past to an extent.

Second, I’ve picked a no-mustache beard option – in spite of paladins notorious for being religious, serious and stuff, I wanted a happy version. First and foremost, he’s a defender of his homeland – prioritizing cheerful and sunny Dun Morogh over hanging out with Silver Hand and spending his life bending the knee in prayers, masses and whatever they’re up to in their chapels.

Third, albeit paladins cry out for golden/red hair to deliver the Light message, I’ve picked the black hair color. This suddenly made him so down-to-earth, excluding zealotry and religious boredom, and at the same time NOT making him sinister and evil.

I think there’s no better thing for me in WoW than giving birth to the new characters – as in book characters, not technical alts. I’m always happy to come up something as cool as that :)

Also with raids gone, I miss the variety of activities in the current WoW. Emissaries are quite useful, and I do them of course. But why not run a few dungeons when everything is said and done? :)

But to think of it, me and dwarves? I’ve got three, and it doesn’t feel a lot. What do you know.