As planned, my major roster is on hold for the next week, waiting for Dazar’Alor LFRs on January 30. Only barely I logged in for Fearella and Schlitzchen to complete their Darkshore tour for Ivus and 12 rare kills, and this is it.

I’m deliberately not pushing my toons with incursions and warfronts, because this is what we will be doing during raid queues, not to sit idle.

Meanwhile my small new alt army is catching up slowly, but with persistence.

Arkeona the Warrior is tanking dungeons one by one. The queues are almost instant, and dungeons are a breeze. There are some issues of course. Elemental shaman can’t get that their earth elemental is their emergency tank, used only in cases when your major tank dies. It is not a dps boost – fire elemental is. Many people quit unexplainably. People tend to aggro trash before me and die and wipe the raid. One dude aggroed three packs in Stratholme – deliberately – and quit to leave us wipe. But 80% of the runs are actually fine. I’m a good and responsible tank, and I feel myself in protection spec like fish in the water. Knowing all the dungeons like my palm also helps.

Tip for healers and damage dealers: if you aggro some shit and you can’t bear the damage in your face… Never. Kite. It. Away. From. Others. Your one and only option is running directly through your tank, and that is where you drop the aggro.

Tanks have a whole pack, or a boss, or both on their hands, and they’re trying not to die. Tanks never, ever would like to chase you around the field to catch that single mob or a couple of them, risking to lose the more important aggro.

My dungeon streak for a single session is about 5-7 dungeons, then I get tired of them and go to do anything else on other alts. Arkeona is 50, and I think it’s a nice weekend result.

Melaris the Demon Hunter is now 120 – yay! I’m having a zillion of things to do on her – war campaign, Saurfang, settling on another continent, Darkshore introduction, etc etc – not to mention the Vol’dun major questline which was barely touched during leveling. She’s currently 296, and I crave to drive her to Uldir and warfront 320 asap. The key goal is gearing up, because most of the other quests and activities could be completed while in queues.

Jagda the Shaman has started her crawl through Stromsong – I’m not in a rush with her, but leveling is vital in the coming weeks. Transferring to BfA content is actually great – even in Legion an alt felt like an outsider. Now she at least walks the same roads.

Kargash the Fire Mage has brought honor to the Mag’har: 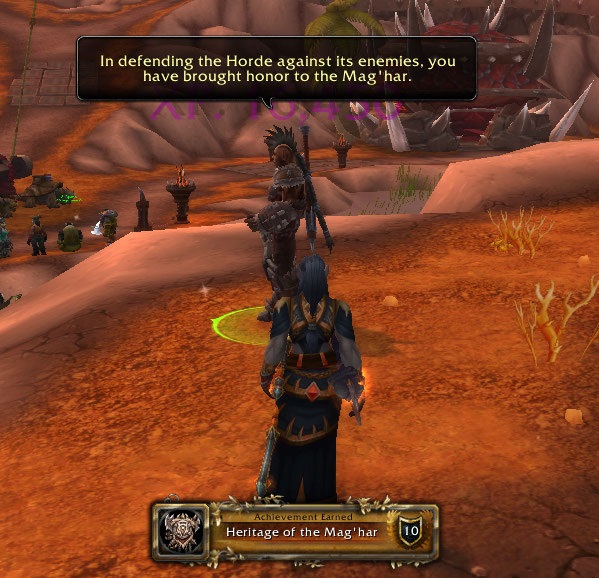 She’s already started trotting the BfA lands as well, clad in her brand new heritage armor. It is actually very cool: they give you the same set in three colors – blue Frostwolf, black Blackrock and red Warsong. Canonically Kargath, Ner’zul and Kilrogg didn’t make it with their clans, so they don’t give you these options of Shattered Hand, Bleeding Hollow and Shadowmoon. Nevertheless, my mag’har hails from Shattered Hand, so I chose the fitting black colors: 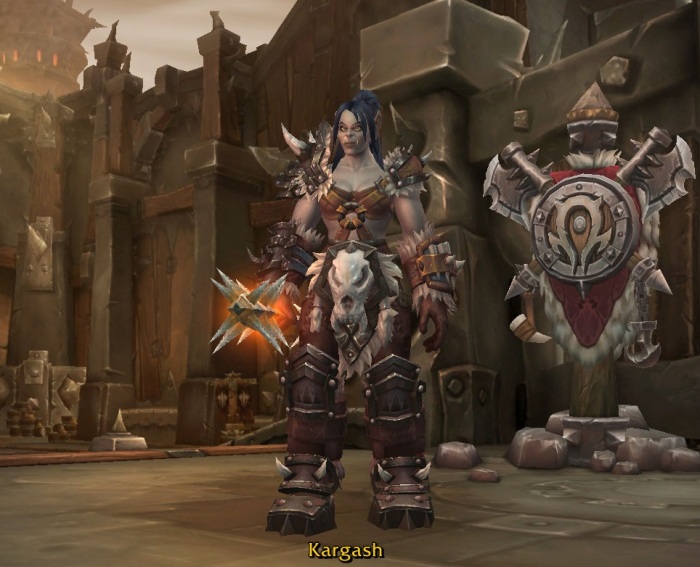 It is awesome to associate my orc with the heritage, so let it be it for now :) I even kept the shoulders.

As planned, Jagda is blended with Kul Tirans citizens: she uses the heritage armor vest, a Kul Tiran belt, a smaller Kul Tiran anchor shield and a fitting fist weapon which is conveniently hidden in all shaman situations, but doesn’t spoil it if it’s occasionally out: 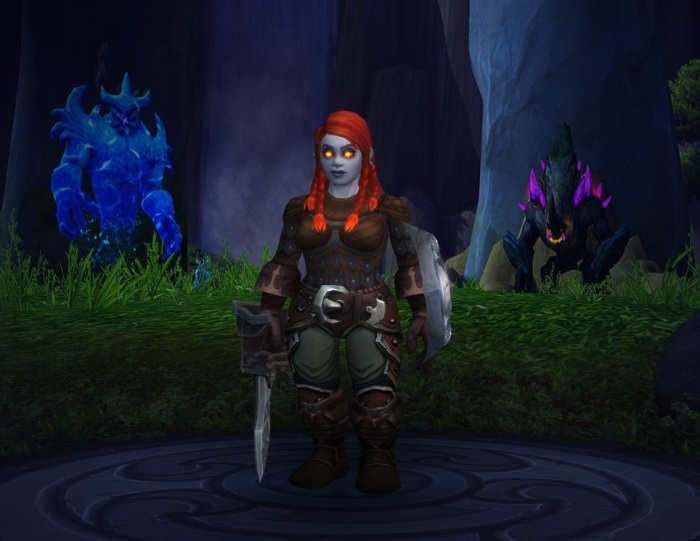 She actually feels at home when dealing with the locals.

So, another week of alt-only gameplay coming for me. Good luck to those who start the raid progress tomorrow!

One thought on “Onward to the Next Raid”