It is funny how I got so swallowed up by alt leveling this week that my major roster went unattended. Tired of leveling, I logged in on Sunday night with them only to discover that their weekly routines were untouched!

Off they went, and with astounding results:

So, it’s only 1 (one) Taloc run per week left. I’m crossing my fingers to get this last piece to drop before Dazar’Alor – it’s 2 more weeks, 4 tries with coins – to transfer for the next tier with a light heart.

Uldir is not a bad raid neither in boss mechanics nor in lore, but it will always be remembered as a raid where trash caused more wipes than bosses. This is what left me exhausted after half a year runs – not a place where I’d like to return on purpose. From now on, it’ll be simply an extra activity to earn gear for alts.

Darkshore was generous to grant extra tmog pieces – I specifically appreciated the awesome 2H sword drop with a skull on its hilt. Overall, I’m not a huge fan of this warfront gear (except for night elven cloth which is one of the coolest ever), but weapons are amazing for both factions and a must have. Warfronts are a cool and exciting gameplay for both siege and patrol modes to me.

My incursion routine is 1 toon per incursion – that is, quick and non-grindy. The goal is still completing every incursion on all toons. Then I’ll be doing them if they are up during my raid queues in February.

I’ve saved enough medals to buy a small dino pet on the Alliance side – it’s the cutest thing ever, and it was worth every medal spent and more. I believe the Horde has the same thing, but in color red.

Alts are feeling great: my demon hunter crawled one level up to 115, my dark iron and maghar have finished with Draenor and already carving into Broken Isles. I want to leave them behind asap.

On Friday night my wife was telling our friend that ‘he has 10 toons’, I counted them and realized that I actually had nine :) What do you know, yesterday I had a nightborne warrior up. The idea was to make the number of toons per faction equal like I had back in WoD. She’s already 31 this morning. As always, it’s been class trial first, and I was amazed with her animations and vibe in both Protection and Arms specs. I’d like her to be Arms in the endgame, but now I’m leveling her as a tank due to instant queues. 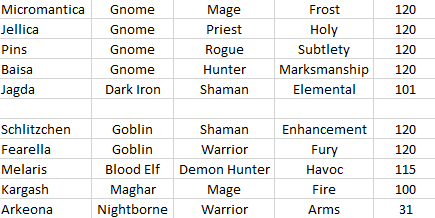 What do you know, my whole gameplay is about rise and fall of alts.

2 thoughts on “Almost There”