The chart pretty much explains it all: 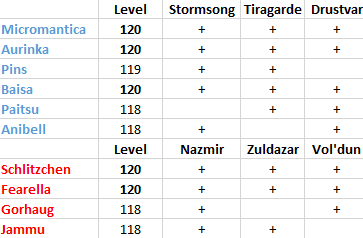 Yes, I’m finalizing my alt leveling project this week. All zones but Nazmir now have only one run left, and this means proper reading quest texts again.

It is vital to immediately get to your capital city upon 120 to get world quests/flight whistle access. Do I have to explain? When Baisa hit 120 tonight, she completed the world quest in Sagehold which would otherwise be her leveling +34k experience points. And couple of Tortollan quests + a rare kill – on her way as well – granted her first emissary reward, the awesome shoes of 305.

Gear is so vital. I need to share my pain. Hitting 120, much like in Legion, immediately drops your survivability and DPS to ground floor and below. The mobs are just smashing you – be it the self-healing priest or a personal tank-protected hunter/warlock, 4-5 mobs coming at you will mean a certain cemetery run. Amusing, but the last leg of leveling is the most painful experience.

Yet the end is near. 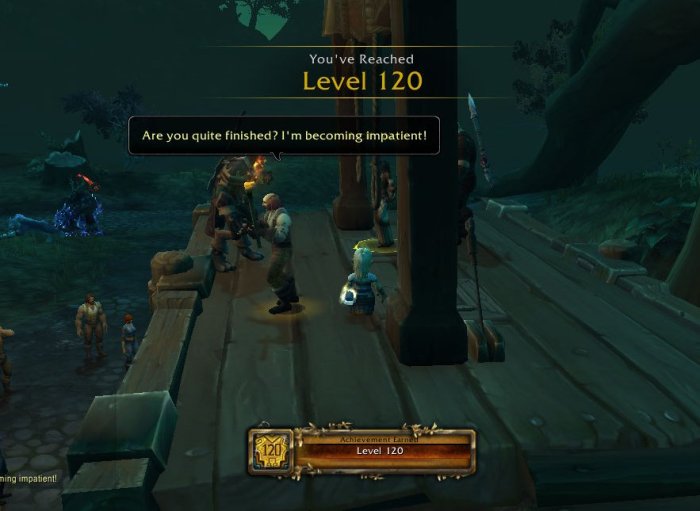 My Jaina’s questline advice of delaying dungeon runs is not legit. Apparently you need to unite all Kul Tiran nations first which means final dungeon quests, and then go for repeated runs along Jaina questline. But still you will get your 120 gears anyways, right?

Horde’s Ready for War quest-before-last is awesome! Right when Alliance strikes the ships in the open sea, you spend the whole fight underwater completing your mission and arrive on the surface to witness the circumstances :) Questing in the bottom is amazing! You do it in complete darkness, and once you switch on the lamp, a deadly shark may come in a while if you’re careless. Just yesterday I watched a giant shark thriller movie with Statham, all to add up for my immersement :)

And there is also such a major and unexpected find there! The Horde has now a major ace in its sleeve, and I’m itching to find out where this leads.

Warfronts are confirmed to serve as a raid replacement content. You cannot queue there under ilvl 320 (like in LFR), and you get 340 gear for its activities (like in LFR).

My best guess is that the rewards won’t scale. A warfront is tied to a raid tier. So, Arathi equals Uldir, and the upcoming Darkshore will give the same gear ilvl as for 8.1. tier of Zandalar Siege. So don’t save the warfront runs, you may want to farm the hell out of transmogs, toys and mounts while it’s current – like from a current raid.

Micromantica is digging emissaries. While the hasty guys already have Dark Irons running along Kul Tiras already, I’ll be hitting my fair and square Revered BfA Diplomat achievement this week. Tortollans and Magni lack one emissary to complete. My best shot so far are Storm’s Wake with 8,5k Revered.

More Uldir runs in the first wing brought me a couple of tier pieces.

Looking forward to endgame with all my toons!