Skip to content
HomeUldir: A Peep into Halls of Containment

The first wing of Uldir is up and running – Halls of Containment. The wing contains three bosses – Taloc, MOTHER and Zek’voz. 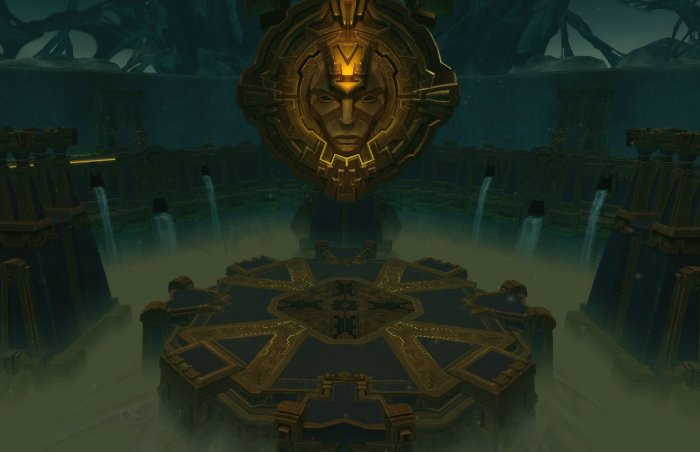 I came drastically unprepared. This is actually funny :) A friend of ours came to visit yesterday (she lives across the road, so it’s a common thing), and I’ve remembered that we have a new raid available only after a couple of hours and a couple of beers :) So I excused myself, left her and my wife chatting, and logged in to manage this before bedtime :) Naturally I didn’t repeat the tactics which I read before. Queue time being less than 3 minutes (I didn’t even get to my first world quest) didn’t help. So, I had to check the things on spot.

Uldir doesn’t look as easy as the Emerald Nightmare. The only thing that makes it being the ‘first’ is the bosses’ health bars. I felt that the fights were very quick, like killing a stubborn rare mob of elite sort.

The looks are beautiful – this ring in the central hub, those titan machines, and at the same time this uneasy rotten addition. This blight is more prominent in Underrot, but like Emerald Nightmare’s red blobs, it’s certainly quite unique and somehow cozy in a twisted way. In the raid it is masterfully intertwined with titan building, so it’s the nice place to walk around.

There is not much trash, and the trash encounters are not long and/or annoying, just your normal guys. Remember how EN just swarmed with them – I hated that satyr pipe after the first boss. Trash are blood trolls of course.

Lorewise, I think the Alliance gets a nice lead in – considering that this is certainly Horde’s raid. We’ve been around the raid when we settled an outpost in Nazmir, I think Brann and Keeshan explained the things to us.

And there is Brann in the raid itself to explore and explain. Obviously he can’t pass by titan structures, and he has some experience with Old God defilement (Yogg-Saron, anyone?). I will see what the Horde version of the raid looks like on weekend.

I think they were not as easy as the first expansion raid would suggest. They have certain mechanics to be figured out, and following them is crucial for success.

Taloc – this construct was damaged by a goblin walking tank, and from the subsequent falling through the roof deep down (this happened during Nazmir leveling questline).

Taloc is nothing to worry about during the first two phases (cudgel and elevator), and it was a mess in the third. I was always having different blobs following me, and I need to read the tactics again to see how to avoid. Nevertheless, I didn’t die, and Taloc came down with our first try.

MOTHER – is a boss for group coordination, and this is punishing a lot. There are three rooms divided by grid. Raid has to move through the grid to another room to avoid a wipe when MOTHER will purge the current room in three minutes.

The problem is, every player passing through the grid will damage the whole raid, and also spawns a blob add which is to be killed asap. So the idea is to bring small groups through the grid to let healers cope with the damage and not allow too many adds at once. If the whole raid passes at once, it’s an obvious wipe.

Our first try was an obvious wipe in the second room. On our second one, more people understood the idea, so it was a success. It didn’t save me from kissing the floor though. Me and several guys (no tank, no healer) went first to the next room, adds chomped some vital pieces from us, so when the rest of the raid moved after the boss, they obviously killed me.

It’s an interesting mechanic, and I think this will be one of the best and most remembered.

Many-many points to Blizzard for MOTHER’s voice! It’s mechanical, artificial, and very pleasant to listen to. Such a difference from normal titan’s booming in low key.

Zek’voz – I hated his appearance. It’s so unimaginative, yet another qiraji or mantid’s big bug. Just a common bug.

There’s nothing too complex about the encounter – step out of the bad, bring the bad to the edges of the room, catch an orb, kill adds if any, and damage possessed players. I generally liked it. We wiped at 1% the first time for there were too many players catching an orb – so too many possessed to cope with. I also helped by deliberately running into the add-spawning void zone (I thought it was the place where the orb comes – now I learned my visuals).

My loot out of 5 tries (3 bosses and 2 coins) was an off-hand from MOTHER. As I currently equip a wand and an off-hand, it was a nice upgrade.

Generally the first wing and the raid as a whole is nice. I liked the visuals, the boss variety, the imaginative mechanics and the lore part. Basically – everything. Let’s see what’s next :)

6 thoughts on “Uldir: A Peep into Halls of Containment”