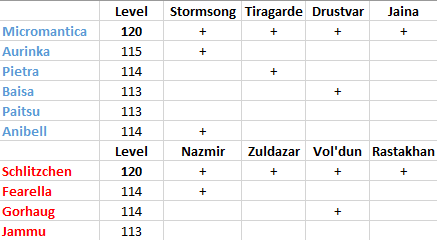 No falling back! :) As you see, Anibell, Paitsu and Jammu leveled a bit – now no toons are below 113. We’ll see what weekend will bring us.

Some trivia thoughts along the way:

There is a small amusing thing I’d like to share :) Monks in WoW are not your fast brawlers. Their rotation is slow, like destruction warlock’s: you hit, and your fingers rest waiting for GCD to roll. It’s not that they are weak, on the contrary, they’re powerful. But it calls for a very relaxed gameplay.

When in the fray, I caught myself on the thought (in Legion too) that I constantly do small turns with A and D buttons, just to feel the gap between the blows :) Obviously it’s a subconcious desire to turn the monk into a quick and super fast fist-fighting machine like we are used to seeing in kung fu movies :) I’ve embraced the idea that they are not, they’re a mortar type rather than a machine gun… and you just need to ‘Relax. Enjoy’ this pace. No more turns :) And now I know that if I choose my monk to play this evening, this will be a restful and thoughtful gameplay. Serenity!