Siege of Boralus is a mythic-only dungeon, and it is required to complete Jaina’s story, see a cool cinematic and complete the achievement A Nation United. So I just had to complete it.

I still cannot understand why Blizzard doesn’t include non-keystone mythic dungeons into the group finder. What I did yesterday was the same group finder task except that I had to appoint the players with my own hands. The group assembled in the course of 10 minutes, and off we went.

We were pretty new to the dungeon, including our tank, and our item level was not that good, especially mine 297. We discussed that we want a nice and slow run.

Mythic Siege is quite punishing both in trash and bosses. I were the squishiest one, mages have always been glass cannons, and this time I literally felt being made of glass. Trash and boss mechanics are quite inventive and interesting, and they can drive you to the grave with a slightest mistake, not even my constant frost shield helps much. We were abusing Time Warp/Heroism at every boss, and it wasn’t a waste at all. All of us died in certain moments, with trash more than with bosses. We experienced actual wipes (three) only at the last one, while figuring out a strategy. I managed to survive the second boss. The other two I spend kissing the ground for half a fight – just due to my squishiness, AoE strikes all of us equally, but I die as the only mage.

The Siege is awesome in lore, as you gradually clear the city from the baddies and end up with the fight most epic. Bosses are very different, I can’t even name my favorite – they all are. Whoever designed dungeons in BfA deserves a medal.

After you end the last boss, there’s Jaina with whom you have to speak to see the finale cinematic or teleport out of dungeon. As far as I understand, you may opt not to do so and just give in the quest outside of dungeon.

It was a nice experience, and I may repeat it on my other toons – definitely the Horde version too. Although mythic re-runs of the normal dungeons are still not my thing.

The rest of the evening was devoted to covering Vol’dun side questlines with Schlitzchen. There were actually five different hubs left:

I loved them all, so immersing. And they were plenty in experience, driving me up by a whole level.

Upon that, my Vol’dun journey is finally complete.

I started questing in Zuldazar then, and the city is actually so big that I never even left it while doing 3/7 of quest achievement! Much like in the Alliance questing, you are investigating different scheming against the throne, and I’m eager to learn who the villain is.

I absolutely love troll lands. Alliance zones bring to mind Hansa type of cities and areas, packed with the most beautiful and serene nature. Horde is always feeling like in an Indiana Jones, or Tarzan movie, or Duck Tales, or something alike. It tickles my inner teenager, my inner explorer so much! Although IRL I hate the idea of going to hot wild places, I definitely love to watch the adventures on screen, and now you’re in the middle of it (while of course sitting in a comfortable chair).

As planned, aside from Micromantica’s emissary runs, I’m finishing the Horde questing in full before everything else. I’m excited and it’s one of the happiest expansion steps so far. There’s so much to learn and explore…

P.S. The Zandalari king is manspreading: 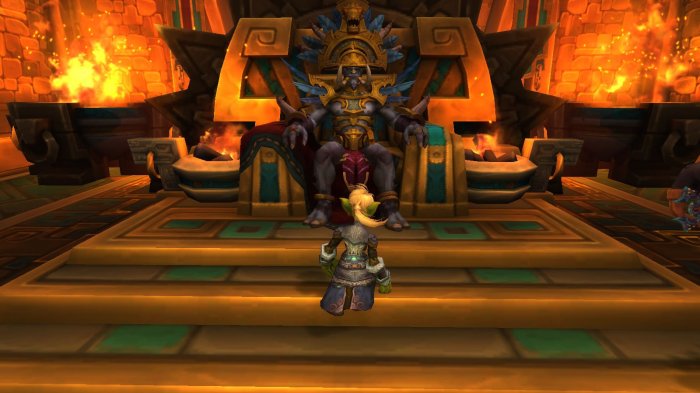