This morning has brought us the first part of the War of Thorns campaign.

I’ve started with my orc warrior Gorhaug. By all means it should be your Horde character coming first if you have one, because they are the ones to initiate the war, and they are making the first steps.

The Horde’s experience gives us a perfect understanding of how convenient the travel is in the latest expansions. Even though the events take place in three bordering zones – Northern Barrens, Ashenvale and Darkshore – every errand quest takes much, much longer than actual fighting and cutscenes. Things speed up a bit within Darkshore, but still.

The Course of Events

Anyways, the plot is no surprise for those who tracked the news. First we meet Sylvanas in Undercity who reveals that she tricked Alliance spies and is aiming her armies for Teldrassil instead of Silithus. Then we need to go to Northern Barrens and meet the army under guidance of Saurfang… for a talk, then he sends us away. We start the assault with claiming Astranaar by acting like guerilla assassins. Saurfang is sent to assault Darkshore from Felwood mountains, and is nowhere to be seen in this week.

Then we fly there and back in Ashenvale for different planning errands before we meet by the wisp wall, envoked by Malfurion.

A distraction is planned, as Sylvanas is a brilliant tactician, so we bomb some trees to lure the wisps away and make the wall thinner. Then she personally holds a painful shield to let our armies pass through the thinned wall, tapping into her void/undead powers. It hurts!

We manage to raize a couple of villages, but the assault is stopped at the river – the defence is too thick to proceed. Basically what we did with Sylvanas today was setting a foothold on the Darkshore/Ashenvale border and wait for Saurfang’s attack from behind to join forces.

Also some azerite is discovered, and we are allowed to use a goblin copter with flashy azerite missiles after we mine some of it. Obviously it will be used as a weapon.

All four available world quests had different armor pieces as a reward. I must say that they are worth doing to my toons – the item level is 210-225, and all my pieces were about 197 or so. If you need to know, they were LFR Antorus drops.

There’s nothing new about transmogs – as I already had the models.

The world quests are more tedious than Legion’s – for one of them, I had such poor quest item drops, I think it was one item per three mobs killed.

Common mob drops are suggesting Legion content: for example, eggs for Cooking, and even artifact power items (to be vendored).

Lorewise, they are about the ongoing campaign (obviously) – kill some enemies, get some azerite, supply your troops. 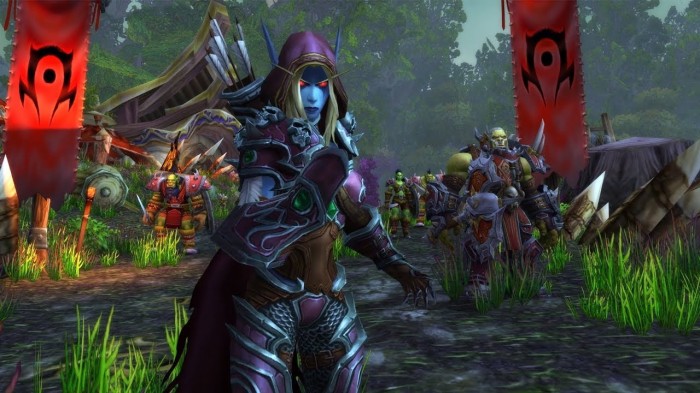 You all know that Blizzard is very skilled in making you support the other side wholeheartedly. In Warcraft III human campaign you desperately fought against the Undead Scourge and hated them with all you veins for destroying your homeland. In a couple of missions forward you play the Undead Scourge and bombard the very same Lordaeron troops and villages with your meat wagons, jumping from excitement. That’s how Blizzard normally works.

Yet this time something went wrong. I fully accepted my orc’s identity and roleplay – she’s a proud daughter of the Horde and she’s ready for some action. And this action somehow felt wrong. We are aggressors, we invade the sacred elven lands. Even though Sylvanas doesn’t (yet) use her blight or whatever genocidal weapons and fights with her skill and blade… it’s wrong. My orc feels that there’s no honor in this invasion. And I’m very, very wary about Sylvanas. It’s not comfortable to be along her side – I always expect a stab in the back for whatever reason.

Mind you, I like the idea of war and cataclysmic events in general. Worlds shaken, new stories carved through the familiar landscapes. And I’m not a fan of the night elves at all. And still.. it just feels very wrong for the Horde member.

Remember Saurfang’s looks at Sylvanas during the Legion defeat feast? So wary? That’s my looks exactly. My orc warrior is waiting, siding with her warchief Saurfang. A single step against the honor – and Sylvanas will experience Garrosh’s fate.

Evening: Micromantica and For the Alliance.

7 thoughts on “War of Thorns: Part I”