The bulk of my gaming time during weekend was devoted to getting pet collection achievements from Cataclysm / Lich King.

The side goal was to test squishing for the old raids farming. I must report that there are absolutely no problems in WotLK/Cata raids. Yes, there is a small decline in DPS output, but it makes the raids a bit more interesting solo. One-shotting older bosses is not a thing anymore, so you can actually even perform a round of your rotation before they die in shame.

Raids are absolutely safe to run for every class – bosses didn’t manage to become dangerous. I have not tried Pandaria raids yet, but I think it’s beatable as well.

One of the brightest examples is Shannox. As you remember, he’s got a couple of hounds. If you’re not in a tanking spec, they have a bad habit of stunning you for 20+ seconds and gnaw you for a massive amount of damage which stacks and increases. So, even a cloth toon with no defence survives that like nothing happened.

My result is gorgeous: I have only one pet left from Cataclysm (I think 5 pets dropped or so), and 3 left from WotLK – one from Arthas and a couple from Ulduar.

Besides that, lots of transmogs came from different classes… and the last Firelands mount I lacked: 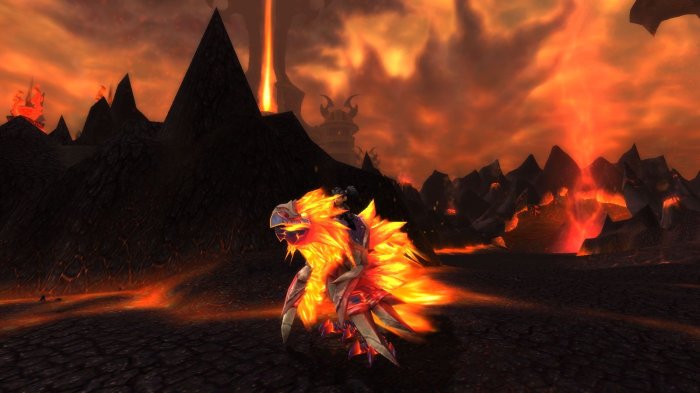 My guildies initiated a Hellfire Citadel run – they invited for Mannoroth/Archimonde kills. Schlitzchen the Shaman joined to test her rotation. We were 4 people: a shadow priest, a frost mage, a warlock (not sure about the spec), and me in Enhancement. As you see, no healers or tanks were present.

As the only melee, I appeared to be tanking the bosses… No trouble at all, they couldn’t beat me under 95%. We wiped only once at Archimonde when he kicked us out of platform, on the second try we just burned him through before he managed to do that again. In general, every encounter took us less than a minute.

Rotation test was successful: I’m eager to keep Enhancement as my leveling spec. Muscle memory is here, and it’s cool enough to play. In raids I’m very versatile with my shaman: actually I can go in every of the three specs depending on the encounter.

In general I got used to all the rotations, and the spec choice is as follows:

You’ll never guess what I saw in model sets panel: the Uldir raid upcoming gear sets. They are four, for each armor type, and they heavily exploit the golem/construct aesthetics – see Cloth for an example:

For reasons unknown, it is now placed between WotLK/Cata model sets – that’s where you can find it. Hopefully it’s a bug and it will be fixed.

The last weekend business was Archaeology. Highborne quest is up, and so I went for the remaining pristine item. Gods of random granted me this in my second session in less than half an hour. Now only Highmountain one pristine remains, and Legion Archaeology will be complete.

The last, but not the least: Arkeona the Rogue, my Nightborne toon, was mercilessly deleted yesterday.

Frankly I have no warm feelings to the race – let it be the Legion story of the past. It was fun to level and animations are good. But I do have a “main” rogue, so there’s no need keeping this one.

I’ve immediately created another Nightborne toon – yes, the legacy armor is still there and available for transmog if you wish so.

My next thought is dismissing:

Kalaari the Lightforged – those Light zealots are awful in lore, and Anibell the Paladin will stay to cover the class.

Myde the Void Elf – while void elves are surely awesome in looks, I have no intention to play an arcane mage, and Fire/Forst options are covered as well.

Jammu the Highmountain – the looks are gorgeous. I think she will stay for a while. The possible reroll here is if I like Zandalar or Kul Tiran druids when they go live. Then I will keep the Highmountain one, and “proper” Tauren Helu coul be rerolled into one of the Allied toons.

So, considering allied races, I’m keeping Highmountain and Dark Iron. Reroll to Kul tiran and Zandalari is an option, as well as making my orc warrior a mag’har.