Weekend was totally devoted to acquiring new Class Order Hall followers for my toons, and I’ve seen them for every class. It was a fun journey!

So, here are the impressions. I would grade the questlines in three groups: Awww, Eh and Meh.

The questlines are very similar: first you are sent to class-specific zone of Azeroth, then every class goes to Broken Shore to solve a tactical task. You get a quest companion / briefing NPC almost immediately, so it’s easy to guess who will be your new follower.

1/ Warlock: the new follower is Kanrethad Ebonlocke, the former leader of the warlock circle. First we cope with cultists in Azsuna, and then you go to Brokens Shore’s most eastern corner to stop some demon resurrection or whatever. The follower is the least interesting, the questline is dull, and it’s grind, grind, grind. It even involves a grinding fill-the-bar quest which I could do simultaneously with a world quest. You know what? I could have completed THREE of these world quests while I did this campaign fill-the-bar grind.

2/ Warrior: warriors get one of the significant faction figures: Darius Crowley for Alliance players or Eitrigg for Horde players. It’s the worst questline as you never guess what should you do… Yes, you return to Helheim because you need to save Valar’jar from Helya’s realm.

Vikings – are – boring. We are doing one and the same thing with vikings through questing in Stormheim, world quests, warrior order hall campaign, a dungeon, and then a raid. All this pathetic speech about halls of valor and helya. We are not that stupid, we got it the first time, thank you. Please just fucking stop it. I’m not excited by any vrykul stuff, it’s boring by itself, and with every new lore piece there are only more iterations of one and the same shit, throughout the whole expansion. Their story just doesn’t evolve anywhere. At Broken Shore you liberate Horde or Alliance warriors at naga enclave, and raise vrykul from the sea to crush Legion portals. In two words, it’s awful.

I never want to see a single vrykul in my life ever again. Apparently I will at least have to “prove my valor” for a millionth time to get a class mount, and I’m already crying at the perspective. Look, even the guy himself is bored. Get a life, man! Azeroth is a place full of wonders.

3/ Paladin: Your new follower is a no-name Nerus Moonfang, a Night Elf ghost. He sold the asses of his people to Legion, so we retrieve his relics in Val’sharah, and then we go to liberate the ghosts near the Broken Shore northern flight point. He didn’t seem any interesting to me, I don’t care if his redemption is successful, so the questline is just “Let it be”. To compensate, paladins may get a second follower: Maximillian of Northshire. Apparently I didn’t do his Un’Goro quests in my pally, so he wasn’t available for me yet. The guy is hilarious, so I definitely want to see the sequel of his story.

4/ Mage: Aethas Sunreaver, the Horde leader in old Dalaran. He somehow rushes in the Order Hall and says: I’m with you now! Let’s forget how we helped Garrosh to try and destroy the world, and then you slaughtered us! My Micromantica is a close friend of Jaina, and she cannot greet Aethas with her hands open.

So, why couldn’t he at least be there from the very beginning of Legion invasion?

Anyways, we travel to Suramar and retrieve some what’s-its to strengthen Dalaran’s defense. A decent cause, and it wasn’t much boring.

Mages also get another follower: Alazakzaram, the trickster goblin in Dalaran who is also a mission table guy in our order hall. There’s a small and funny travel into his tophat:

I secretly hoped that our new follower could be Valtrois. Alas, did not happen.

5/ Rogue: Again it depends on the faction. You receive either Tess Greymane (Alliance follower), daughter of Genn and heir to the Gilneas throne or Lilian Voss (Horde follower), the famous Undead rogue you may know from Scholomance or Tirisfal Glades questline.

Your goal is diversion, so you travel to pirate enclave in Azsuna to steal some black powder, and then you go to Broken Shore to blow up a cave with some serious Legion leaders within.

I liked how the Broken Shore part was designed, but that pirate enclave is depressing, swarming with unnecessary mobs (flight and stealth doesn’t help much), and your briefing guy admiral Tethys is just an idiot. And not a hilarious idiot, but an annoying idiot type. This is why I’d say the Rogue experience is 50/50, so Eh.

6/ Shaman: one more questionable morale questline. You new follower is no less than Magatha Grimtotem who’s responsible for Cairne Bloodhoof’s treacherous death, and who attempted to claim Thunder Bluff to herself. In other words, Grimtotem tribe are evil Tauren. She rushes into our Order Hall, and guards won’t let her in. You go with her to Thousand Needles because Legion is an ultimate enemy, so we must help her. And then she tries to get some Pebble of Doom to herself – well, because she’s evil. We don’t let her, and we go to Broken Shore to stop the demons messing around with elements. Magatha accompanies us.

The whole questline seemed so unnatural. If we don’t trust her, why would we leave her to hang out in our Order Hall? And the Pebble of Doom was something not well explained or introduced, first it’s obtained as some loot like ‘old fingernail’, and then it’s an action button which nearly got me killed. I couldn’t care less. It’s very close to “Meh”, but it’s my favorite elements in action. And I also awarded bonus points for travel to Thousand Needles (could have been Deepholm or Firelands or Vashjir, so blessed be Blizzard).

7/ Hunter: Remember how you “bolstered our ranks” by “seeking out the withered” and suddenly there came a wandering elite rider from behind and killed you in seconds? This is Nighthuntress Syrenne, a new follower in Survival spec of hunters’ order hall.

First you find her injured riding manakitty in Crimson Thicket and cure it, then naturally you make friends with the rider herself. And you go together to Broken Shore to liberate many beasts from fel corruption. It’s a solid good questline, and in true hunter style. I felt affection to the follower, and I’m glad that shal’dorei joined us.

8/ Monk: Your follower is brewmaster Almai, a Pandaren girl. You return to Stormstout Brewery to save it from Legion invasion, and then a terrible treachery happens in your own order hall. It’s one of the two order halls that are attacked by Legion directly. When you clear the mess, you go to the central part of Broken Shore to prevent making poisonous fel alcohol.

You would never think, but the jovial monks tonight are engaged in one of the most grave questlines. There’s not a grain of fun in the questline, it’s very tragic and serious.

9/ Demon Hunter: the follower is Lady S’theno, the leader of your order hall naga. This lady just got bored of sitting on her tail in your order hall, so she wants some action. Trouble comes right to you: Mardum world and your own spaceship are suddenly attacked by Legion, so you fight with the demons right at your order hall and outside.

Then you go to Broken Shore, to Tomb of Sargeras grounds to retrieve few mats for repairing your order hall and recover the defenses. The questline is pretty boring, but I liked how Lady S’theno openly despises you, Illidan, your order hall, your illidari, and claims that she’s on her own. She doesn’t obey, she cooperates. She acts because she believes this is right, not because illidari stuff and home are awesome. My Melaris the Demon Hunter has exactly the same thoughts, so I think we could be friends.

10/ Priest: your follower would be Aelthalyste, a Priest trainer from the Undercity. Not faction specific, because my priest is a Gnome. The questline is awesome. You go to Highmountain swamps in the north to investigate the infestation and help find a cure for Aelthalyste’s apprentice. During the quests you need to use a wide range of priest’s special abilities. Then you go to Broken Shore island to dispatch some plague devices.

The questline is very fun, inventive and awesome, although I was very surprised to find a banshee as a priest follower :)

11/ Death Knight: will be followed by Minerva Ravensorrow, an Undead Death Knight. The goal is to retrieve an item from Pit of Saron – so that you’d be able to rez some dead dragons to your cause. And then you naturally go to Stormheim where you could find the dead dragons graveyard :) You rez some, and then there’s an ice breath bombardment as a climax rather than you common boss fight. 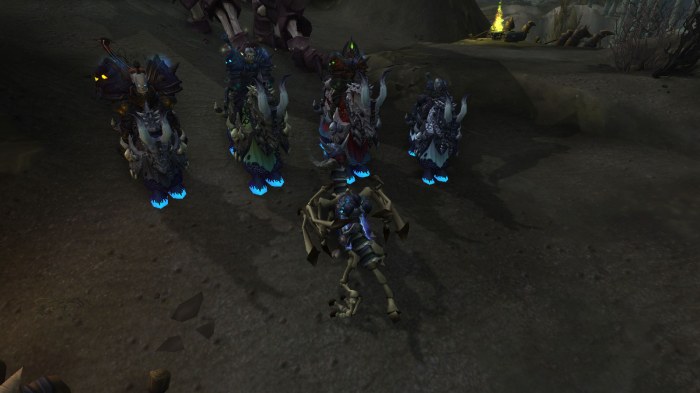 Minerva, despite being a Death Knight and an Undead, is a very cheerful person. I laughed so hard at her speeches and a comical voice :) So I was just glad she joined me :)

12/ Druid: the last, but not the least is Thisalee Crow. Druid of the Purr, Thisalee is a hyperactive and fierce Night Elf teenager. We go to Hyjal to cope with demons at Aviana’s sanctuary. Then we learn that Goldrinn, the big white wolf, is in depression because Varian died! So the wolf just slumbers in Moonglade, and demons want to corrupt him, or tickle him to death – either way, we are on errand to wake him. We do, and the most awesome follower Thisalee joins us =^+^=.

Order Hall campaigns are cool and inventive. I like how they brought us to different corners of Azeroth, showed us that all the world is threated. I liked how Blizzard gave every class a new storyline, and eventually they all took part in striking Legion in Broken Shore: every class in his own area. So when you’ve seen all, you can see the whole picture how order halls work to defeat the Legion at every front.