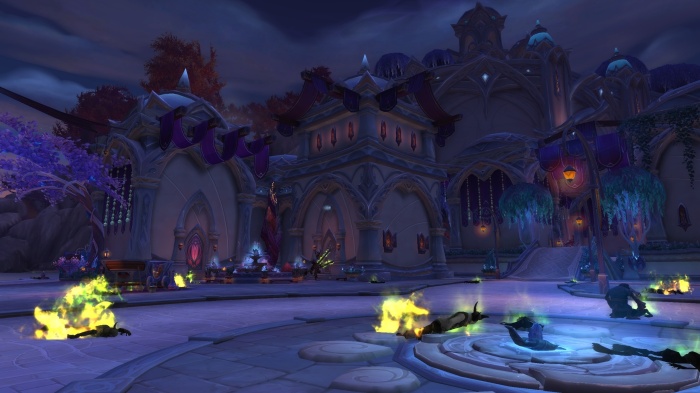 The Insurrection questline in Suramar picks you up from where the Good Suramaritan story ends. You have grown the magic tree, healed the Nightborne from their mana lust with its fruit, and collected enough refugees and withered to prepare for your assault on Suramar. This is also where the elves of Azeroth join the fight.

You may want to complete the storyline on your alts for several reasons. First, it’s a cool story by itself, and it is a lead to The Nighthold raid – actually it explains how and why you get to the entrance. Second, it’s completed pretty fast, with only 10-20 minutes per one of nine steps. Third, it’s immense amounts of artifact power. The final rewards for every step range from 125k to 250k, you get some 25k-65k items in between, and in the end you get the final quest to kill Gul’dan for 750k of artifact power (although you get an achievement before that).

By now I have completed it on nine of my toons, and the rest three will finish it by weekend. It’s perfect timing as the next week we actually will be able to put an end to Gul’dan.

I would write here a storyline summary along with my thoughts and few tips on the best ways to complete the steps. The post would contain spoilers, but it must do so as the post will also serve as my diary page, not just a guideline.

Before every step Thalyssra would ask you to give a mana fruit to permanently heal one more refugee in Shal’Aran. I tend to give them to children :)

Your portal to Waning Crescent quarter vanished, and you go for investigation. Oculeth sends you there, and you find a slaughter: the demons and Felborne elves are swarming in the streets, there’s bodies everywhere. The conspiracy was finally discovered and punished. Not your safe haven anymore.

You are charged with the task to avenge the dead and save four groups of survivors, and then you leave the quarter in a boat to find a new safe place for them. Upon very short voyage there’s a watch tower by the bazaar, so it’s your base now – and your portal is set to get to dailies to replace the Waning Crescent one.

When you set the portal, you teleport to Shal’Aran and meet Aluriel who came to mourn Alurin and help our cause. Usher her from the entrance to Thalyssra, and we’re done here.

You’re sent back to the new outpost terrace. Just across the water you see a big quarter filled with Felborne and demon jailers. They have chained many Nightborne and prepare to send them as a fuel to Felsoul Hold.

You are charged with the task to go to the jail quarter, put a mask on and show a dusk lily sign to the Felborne guards. You need to recruit five – but some of them are true to Elisande and will fight back. You also need to kill the demons until you get a walkie-talkie crystal to reveal where the prisoners are taken.

Then you go back to the terrace, and the guys make you to chain yourself and play a prisoner to see where the others were taken. They would follow you, then kill your guards upon arrival, and you would save the prisoners and kill the demon in charge while your allies secure the shore.

Ly’leth informs you that Vanthir was captured, and put in a magic cage for all to see him as a public example. You set on journey with Thalyssra to find three of his most visited sites and click upon his essences-ghosts for Thalyssra to learn his whereabouts.

Then you return ot your outpost terrace, perform a small ritual, and go kill a jailer elf with the help of NPC enforcers to open Vanthir’s cell and feed him a magic fruit. Vanthir’s free.

Before you proceed, Thalyssra would ask you to complete 10 world quests in Suramar. 7 simple quests are available every day, so you can complete them in two days – split the amount as you wish (7 and 3, 6 and 4, or 5 and 5).

Here you finally see some Azeroth forces taking some action in Broken Isles. Apparently elves took the whole Suramar business very personal – Tyrande even claims it to be her home city, so you are to report straight to Suramar entrance where you meet Vereesa of Quel’dorei, Lady Liadrin of Sin’dorei and Tyrande of Kal’dorei and their war camps. Thalyssra is also present with a party of her unexperienced hobos. And one poor Khadgar is trying to keep them all from ripping each other’s throats. Elves don’t like each other like at all.

The battle is already rampaging in promenade, and they ask you to help. A Blood Elf spy on the left side will ask you to kill a Felborne magician, and a Night Elf spy on the right side will ask you to solve the portal problem – would they please stop summoning the demons? You are also supposed to encourage the fighting rebels (you must kill their foes first to speak to them) and eliminate any 15 bad guys – demons or Felbourne – on your way.

When you solve these problems for the attacking party, you are to kill a dangerous construct, and it’s a group quest… But it’s not That One Quest, just fly to Crimson Thicket, follow the road, and eliminate it. It’s soloed too easily to be even a group-of-two boss.

This part is both hilarious… and not. First, there are problems in elven camps. There are Shal’dorei spies everywhere, so you are given a detector device and finally avenge the whole “An illusion! what are you hiding?” thing. Second, the elves are trolling each other, and you are to remove those items from the camps. By the way, they are clever and awesome, I would leave them there :)

For the next part you are to battle-harden the Nightborne useless troops and provide them some weapons. You board a hippogryph right in the camp (please don’t go to Val’sharah on your own!) and pillage the Black Rook Hold. Here you have to find 5 tactics books spread all over the place, kill any 20 mobs – these are common mobs – and set 3 beacons for Oculeth to teleport warfare back to you camp.

Then there’s a small story when Oculeth teleports you and Valtrois in a cave in Azsuna – you need to tap more leylines to feed all refugees while there’s still some lack of magic fruit. Stellagosa confronts you in elf form, but due to your presence they become friends, and then they work with Valtrois while you protect them. Their dialogues are just amazing, it’s a perfect comic relief in the middle of a grave campaign. Probably my favorite part in all the Insurrection.

Upon your return, you have to kill a nasty but easily soloable Pit Lord outside of Shal’Aran.

So, finally all is settled between elves (for now), and Nightborne are ready to fight. You need to struggle your way like an arrow up to the Nighthold gate.

In this scenario, different elf troops would join you in battle step by step, gradually clearing the path. The scenario mobs hit pretty hard, so be careful not to aggro too many at once.

When you’re there, Khadgar and Oculeth set your brand new Shal’Aran teleport, and your allies are here looking at The Nighthold main gate.

Khadgar thinks that you shouldn’t forget your followers. Go to your Order Hall, complete five missions while the elves are preparing some artillery, and then you may proceed.

And so, the mighty combined elven force and their artillery approach the gate of The Nighthold. But Elisande has prepared a small trick: after a proper scorn speech she unleashes the power of the Nightwell and traps the troops in a sort of time capsule (Nightwell is about time magic – both Chronomatic Anomaly and Elisande bosses in the raid are fought near The Nightwell and play with time during their encounters). Khadgar and the hero (you) then go in a bubble to rescue one of the leaders: Liadrin or Tyrande depending on your faction.

Then you remember that Ly’leth was not sending you her spy messages for a while, so you go to a secret spot to retrieve them. Not so secret, if you ask me. Well, it appears that she tried to warn you about the main entrance, but she was discovered and taken by the guards.

Valtrois suggests you go to the Sanctum of Order – there’s a sewer backdoor to The Nighthold, so you teleport there and find a barrier which is fed from your own leylines (it’s The Nighthold raid entrance). Ascend back to the portal, teleport back to Shal’Aran, and fly to Crimson Thicket and Kel’Balor leyline feed to complete Valtrois’ investigation: you need to kill two simple mobs there.

Step 8: As Strong As Our Will

They took Ly’leth! When you teleport to her premises (I mean, why if she’s already taken?), a new First Arcanist’s hologram appears and she mocks Thalyssra for playing with the withered. The Felborne guys kill the withered and attack Thalyssra, so she retreats, leaving you to save the remaining Ly’leth’s servants in her manor because slaughter is in progress – when done, you’re back to Shal’Aran.

Withered are vulnerable to fel, so you go to Felsoul Hold to train them – much like your daily there. All you need is to destroy 3 crystals and then a power source – just order withered to do it while you clear the occasional mob on the way.

Oculeth sends you to the Terrace of Order for one yet flashlight game (survey). Then he sends you to his workshop where you teleport in a small room and retieve the data he needs – there’s a convenient teleport home when you’re done there.

Now your telemancy and withered seem ready – you fly to Crimson Thicket to fight a Felborne camp. 8 mobs and a boss.

The final chapter is finally final. But it’s not just a scenario: first you’re sent to grind three leyline feed rooms to set disruptor devices to take off a barrier of The Nighthold secret entrance. You fly to Crimson Thicket and clear Elor’shan, Kel’balor up to the farthest corner (you know where these feeds are if you did Leyline Bling) and a brand new Tenoth’aran which is close to Kel’balor entrance.

Finally everything is ready, and Oculeth sends you to the Sanctum of Order area. The enemies knew about your arrival, but you just gradually clear your way through scenario until you finally kill the First Arcanist Andaris, and the Nighthold secret entrance (raid entrance) barrier is lifted. You get Insurrection achievement, and Khadgar sends your silly loot-heads to do the job of getting to Gul’dan and killing him while the others will follow :)