Skip to content
HomeThe Nighthold: A Peep into Royal Athenaeum 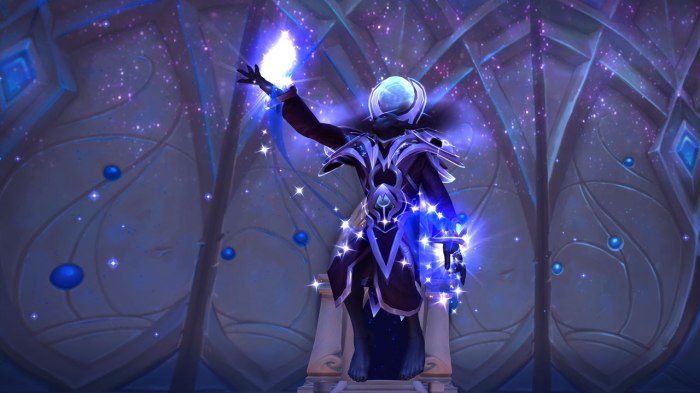 This weekend I’ve obviously queued for a Royal Athenaeum quarter – and ran it with few toons.

My first run on a Horde toon was awful: rage quits, wipes, insults and all the pleasures of an LFR run which is not on farm yet, and people expect the bosses to pop like balloons while they still lack some tactics knowledge and better gear for this to happen.

The second run on an Alliance toon went smooth, and people went joking they would like to form a proper raid group out of this LFR one – that’s how good we were.

The further runs (I guess I did a pair more during weekend) were somewhere in the middle: occasional wipes, but all in all we beat the wing.

What I’m saying is that I saw all the range of group skills during the weekend, so I can be more or less objective.

I’m not fond of Royal Athenaeum.

First, it’s the trash mobs. They are extremely dangerous, and the other time you don’t even know what hit you. When we fought some trash on our way to Tel’arn’s site, there happened some spell which went BOOM – and ALL the raid group was dead in an  instant. Worse, the shal’dorei guards are small, wear camouflage, and you never know how many mobs are there left and whom to kill. I don’t even start with the thing that trash mobs are wandering, and also the raid design suggests that you don’t kill every of them. An unexperienced player would easily bring a pair of extra trash packs into skirmish from behind, and neither tanks nor healers would pull it off.

Yes, the raid environment design. It’s as the least logical as possible.

You don’t feel like you secure passages here. Yes, the raid lore is that we are too small of a group to conduct a proper assault, so the united elven army and us are just a desperate group to reach Elisande and Gul’dan with the least effort possible. Aqueducts worked this way, because it’s our secret passage, and elves secure the grounds after we beat the bosses. Athenaeum – no. Yes, the first boss is a guard commander we need to kill and leave many guards to live if they are not in our way, but why the fel should we get bothered with Tel’arn and Etraeus which are perfectly fine in their playgrounds? They are not even bothering about what’s happening outside of their rooms!

Spellblade Aluriel wanders like a common trash mob, and your actual encounter happens in a corridor. Thus, it doesn’t feel any special at all, but neither it feels like a very fat trash mob due to multiple mechanics to follow. So, it’s not a boss, it’s an annoyance.

Star Augur Etraeus is sitting in a tower. It’s perfectly okay, but you will never guess which passage to him you would have to choose. And when you leave the encounter site, you could easily run into another tower just following the corridor, and that’s where the unnecessary mobs attack you, bringing extra pain to the raid group.  The encounter itself is possibly the only one in this wing that I like in full: very beautiful and also interesting. Bad thing is: you should never be in front of his face as a melee dps which is hard to follow due to the boss model design. If a tank turns him to melee camp, and you don’t react in a second, you’re dead. In my opinion, it’s not the kind of challenge we need – especially when ranged fighters don’t even bother. Also I feel kinda claustrophobic in this room – I would prefer some bigger space of course.

High Botanist Tel’arn is pretty cool, I like the inventive mechanics which require much movement and positioning, and the encounter is also your cleave test which was an exciting game for my warlock. The drawback of the encounter is that it is TOO LONG. Seriously, I get severely bored by the last 30%, and 10-20% feel like a torture. Could be better when people dress up a bit, but it’s quite a tiresome marathon now.

I’m not sure if drop rates were fixed a bit, but I get one or two items for each wing. Too bad my toons only got rings, trinkets or necks – in other words, no tier items yet.

Royal Athenaeum will not be my favorite quarter, and definitely not the one I would remember with any good feelings when we’re a pair of expansions away from Legion.

5 thoughts on “The Nighthold: A Peep into Royal Athenaeum”