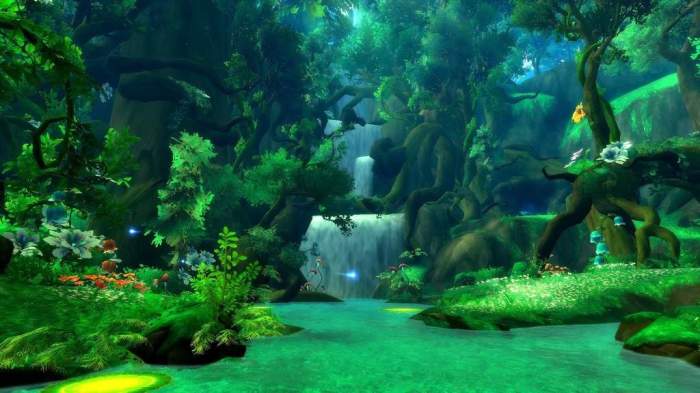 It’s funny how Khadgar tells you in Dalaran: go to Val’sharah, it will be a Disneyland. There’s nothing wrong in Val’sharah.

That’s the moment when an experienced player would learn even before grabbing a taxi: things go south in Val’sharah.

The whole zone is divided into two uneven parts: the small side questline of Black Rook Hold/Gilnean villagers and the major Nightmare.

The Gilnean/Ravencrest are likely to be your final piece of questing in the zone, but I grew to do it in the middle. Right when you arrive in the satyr-assaulted temple grounds, I immediately leave for elven ghost stories. I just want to leave the epic thing in the end, without a feel that you have to go to the faraway corner of the zone afterwards.

I wonder if you noticed, but these Gilneans are NOT worgen. They are not cursed! That’s the coolest thing ever. Victorian, gothic vibe is precious, but all the times before it was spoilt by worgen background. Now it’s pure, with British accents and all. I’ve enjoyed my time with them and questing for the village a lot. I wish there were more Gilnean settlements/quest hubs.

Black Rook Hold is logistics madness. When you arrive there for the first time, you could effectively spend an hour just finding your way around. Once you do though, you blast through the questline in 10 minutes tops on your alts. Apart from that, the fortress has an amazing design.

The messed up ghost thing didn’t sink into me. I mean: they’re friendly guys, but they attack us all the time, and it’s annoying. There should have been a plot thing when we make their minds clear. After all, there’s no need to return there except for one profession quest and one world quest – which is killing a beast. Yes, we should have rendered them friendly. And I would like to have a safe hub there.

The main storyline is awesome. Yet again, I love it when you assemble one big thing by parts. This time we gather the major druid circle. The vibe of bears, kitties and trees communities is delivered at full scale, you see how they work and how they differ from each other.

Xavius is a perfect villain. He’s charismatic as hell, stylish, dangerous, clever and at the same time mad. I consider the Nightmare story very well designed. Once you start from ill Cenarius and small tendrils and totems, the danger escalates quickly, ending in the whole forest parts engulfed by the ‘sickly red’ and setting us a good reason to walk into the dungeon of the world tree roots, and then into the Nightmare itself.

Val’sharah easily beats everything else in Legion in the emotional field. Everything else seems like a sandbox compared to its climax. The final zone cinematic… oh my, tears from my eyes every barking time I played through it, and that was twelve times. It’s not only the sadness of the moment, but the beauty of all happening as well. The final nail is the tune of Nightsong, probably my favorite track ever.

Bad news for Night Elves though: your leaders are stupid as a log. Both Malfurion and Tyrande lost like a hundred points in my eyes during the Val’sharah questing. Especially Tyrande. When we searched for Malfurion in the last village, I was on Xavius’ side who taunted her. Cherry on the cake, Tyrande’s ugly too, and she has no taste in clothes. A perfect combo: stupid and ugly. That’s what Night Elf people need. I mean, come on, what is this monstrosity:

So, what’s with the zone itself? It maybe one of my favorite ones considering travel. There’s a perfectly convenient road network which you can take to any part of the zone. The flight hubs have plenty of meaning and they cover all the strategic points. Even the small island which has a maximum of pair world quests tied to it got itself a flight point.

The drawback is the eastern part of the zone, the one near Suramar. I found some world quests very hard to get to. Anyways, they are very few.

Everyone loves the blooming areas I guess, so Val’sharah is a feast for the eyes. Nevertheless, sometimes it’s too tiresome to me. Maybe it’s too much green to my liking? But it’s not a reason to blame the zone itself.

One thought on “Val’sharah Zone Review: Emotional Climax of Legion”