During the last week I finally had enough money on my Horde and my goblins built us a rocket mount. It cost me 60k for must-have spheres (you can’t avoid it) and 2-3k for other mats (I was too lazy to farm them). Luckily the alchemist Hexen transmuted us some steel, so we were good here. The mount is cool and it maybe the one for Schlitzchen for 2 reasons: first, she built it, second, she’s the Goblin Engineer and it fits her. Sky Golem is cool but eventually annoys you – it just can’t fly straight. But the rocket, it’s small and fast and it answers to your commands.

Speaking about Engineering issues, my newly boosted Human Rogue Hedersen is all about leveling both professions, mining and engineering, but she’s at another server and I can’t send money to her. And now I feel too lazy to go and earn the cash somewhere although I plan to run the major WoD questlines with her. Still, Mine lv2 and Herb Garden lv 2 give her some gold, and her basic bunch of followers are starting to bring it as well. Anyways she has already made one of the toys I needed and one more toy and one more mount are coming.

I was not doing anything significant with my major bunch toons except log in – collect loot and gold from garrison missions – log out. Even if we had 4 days off, I couldn’t make me even going for Argent Tournament token dailies. Yawning from Draenor. Tired of farming mounts. Tired of Archaeology. So, the only option was leveling.

Creating a fire mage was inspired by fantastic videos of Legion’s fire mages. Not only the spell animations look cooler, but they also added smokes and ashes after you kill a mob. I couldn’t help myself and Kellers the Human Fire mage was born – aiming for Legion fun.

I thought about her fantasy and it would be classic for a fire mage – of course, a pyromaniac on the brink of madness. Black hair, because fire pouring through your veins won’t leave you blonde. But it’s not as if she loves to laugh maniacally and throw pyroblasts at a common fly. She’s calm and talks quietly, all the madness is not on surface which makes her even more dangerous. And she’s always kind and nice to her allies, especially gnomes, dwarfs and fellow humans, saving her madness for the right times.

My leveling route this time was this:

Elwynn -> Loch Modan -> Wetlands -> Hinterlands -> Plaguelands -> Badlands -> Swamp of Sorrows -> Blasted Lands. Now you think of it, there are lots of -lands in Eastern Kingdoms… Anyways, it was my favourite Khaz Modan area and a row of scorched zones. You never know or remember why on earth you are playing there, in the “lands” of ash and dust, until you play the quests themselves. You just forget about the scorched area you’re in and choking air. I remember questing there forever in times of Lich King, but now a whole zone will take you 40-60 minutes, and the Cataclysm reboot of questlines is absolutley amazing. I highly recommend replaying them for both Horde and Alliance sides.

While I’m enjoying questlines, I never, ever use heirlooms when leveling. Using any buffs, you just kill all the questing experience – because you overgrow a zone not even starting it. Dungeons help with my leveling but I’m doing them only once per toon.

The point here is not getting to 100 fast. Hell, you started a new toon because you’re tired of top-level activities, so why boost your leveling to get there?..

Anyways, we’re in Draenor-Outland now and sitting at level 60. More fun to do, more quests to solve. 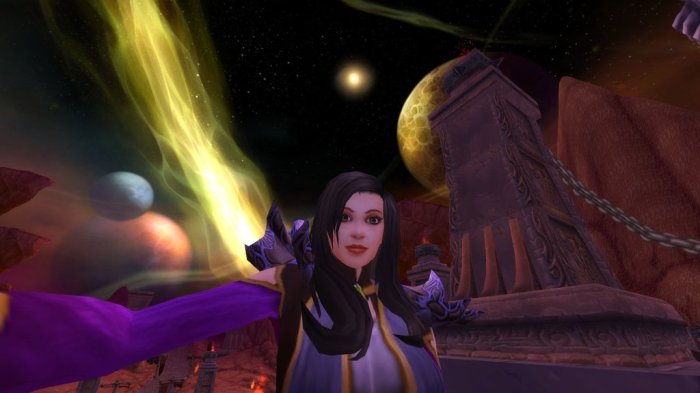