In October – November I took my pleasure to go for a bit of the WotLK content, doing some dungeon/raid achievements.

Also there was a severe rep grind – and now my reputation table for WotLK looks like this: 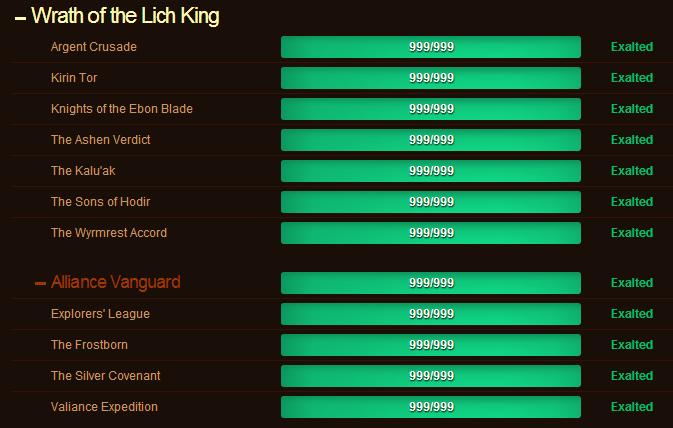 *Sholazar wolves and froggies were Exalted 1 by one too, but they don’t look that good on chart, so I didn’t include them.

Well, now I’m going for TBC and actually there’s not much left.

There’s Shattered Sun Offensive with an immense amount of dailies: ~15 quests and you get 3200 reputation per day. I’m doing them very fast and effective, takes me 30 minutes to complete the whole batch. Shame that the rewards will be only some mogging stuff, no mounts or anything.

Then there’s goddamn ogres of Ogri’la. 4 dailies, and no options. And Shatari Sky Defence – I’m not doing them before I finish Ogres, because 2 ogre dailies grant 850 reputation for Shatari too, and I don’t want this go in vain :) Exalted for Shatari means +6 or so mounts, but I’m not in a hurry for them.

For perfectionist sakes, I need one more run through Black Temple to make it not 480/999, but 999/999 for Ashtongue Deathsworn. Well, I’m doing it anyways, because I need to farm some pets there.

That and Archaeology is basically all my business in WoW nowadays. No desire to go for dungeons or raids specially for Valor, let it burn in hell :)