With all the fruity moonshine finished, Chitsuro woke up at Sholazar with a big hangover and decided to take a breath at some fresh chilly area. Luckily she’s in Northrend, so finding it won’t be a problem.

First, she took a look at the famous Icecrown Citadel. It was very dark and cold here, and the stench from the undead swarms was felt even at the great height. Not an option with hangover, so she just took a photo of cool airships and headed farther to the east.

On her way to the east she saw a cool troll fortress and couldn’t help but take another selfie at the top of the world. 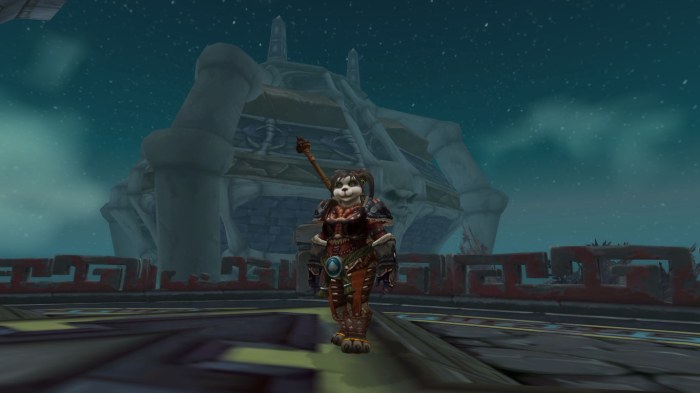 And finally she found herself flying above a sunny chilly area. Feels just right, and there’s a goblin city below where we can learn the news.

The small village is cheerful, but requires some aid of course.

After few hot tea sips, Chitsuro learned that there is a giant woman village who stole goblin men. Goblin women asked her to free them. Not sure that goblins were really kidnapped, the monk kept her mouth shut and went up the hill.

And she finally met the enraged women. They put goblins in cages, so pandaren rolled up her sleeves and prepared for battle!

The big Vrykul ice hags were really a trouble, so to free all the goblins she had to invent something. Luckily there was a Vrykul woman who gave Chitsuro a disguise to walk among the fierce gals.

Yes, it was kidnapping. This womanized society traps best men and uses them for dirty jobs. Even their own kind!

Warden’s jobs done, the monk finally earned the trust and was allowed to the ring of most dumb and brutish Vrykul women she ever met. Though they had some fun activities – it was like an amusement park! Let’s see what they think are best attractions:

And finally they sent her to fight with more Vrykul women on a DRAGONBACK!

On her way to and from the tower where dragons fly, Chitsuro couldn’t hold her breath when she saw some titanic buildings. Ooh, a place is to be revisited!

Positively impressed, she then met a big big big person.

He told her a story worth a silly girl’s talk about some wifes and brothers and other soap opera stuff. Not really impressed, Chitsuro nevertheless agreed to recover bonds of this Thorim giant and ice giants who she was bullying before (luckily she was in disguise!).

And with friendship brought into this world, Chitsuro could finally take a last farewell stroll through streets of Dalaran and leave the unwelcoming frosty lands, too cold for pandaren’s feet.