When Zindari took a glimpse at Drak’Tharon Keep, she already knew that all the Horde’s business will be put aside and she will spend the rest of her Northrend vacation investigating her troll relatives.

Sadly the Drakkari tribe went all mad with all the Scourge trying to push its way into their lands. Well, who wouldn’t? But local zandalari cannot greet their ways of course because it involves murdering troll gods in a desperate attempt to strengthen themselves against the Lich King. So the once glorious land of Zul’Drak is all about ruined temples. As a worshipful troll, Zindari joined the spirits of the animal gods to destroy Drakkari’s mad prophets.

The prophet already sucked his power. To avenge the cause, it took some essences from water elementals and poisonous mushrooms to prepare a serum. The beast happily swallowed it and was immediately weakened so that Zindari could fight him. The local trolls really know about alchemy here. Few recipes to my troll’s cookbook.

Many stabs with poisoned daggers (she couldn’t help but use the serum on her weapons too), and the mad snake prophet just collapsed on the steps of the altar.

A small way to the south, Zindari entered the cozy troll village of Zim’Torga.

It’s inhabited by friendly zandalari who know exactly how to try and cope with the sequences of Drakkari madness.

While Ahunae always claims that the numbers of Drakkari are to be reduced (always a good advice), a troll shaman guiding elementals offers you subtler tasks – and it really makes sense.

First, we must cope with the next-door pool site. I wonder why they even built these pools, as it’s always frosty here. Ice-skating?..

With cauldrons down, zandalari were able to deal with the gods at last. Our next goal is Har’koa, the kitty god. Despite its size and all the wisdom, Zindari couldn’t help but pat her a bit (secretly).

Quetz’lun is really nasty. Even towards those who come to help, she promises to eat us alive.

The mean spirit won’t let the mockery come easy, so she sends Zindari to the spirit world. Never a vacation. But her twisted ideas of what to do with the troll leaders is really worse. MUCH worse.

Shivering with what she just saw, Zindari gladly left this place. Luckily she close her eyes and didn’t even peep at what Quetzlun did to the prophet himself. Next stop – an interesting fight with a troll who builds an army of Tiki warriors.

Although a scientist zandalari (they have scientists? Um…) asked her to bring everything related to troll legacy back to Zim’Torga, Zindari couldn’t help and buried a full sack of Tiki masks near the place. The rogue will sell them later for a HUGE amount of gold. And one to be hung at home. Better than any painting.

Zindari quietly ripped the guts from the big troll’s family and collected key parts to release Tiki fury on the leader himself. The bloodbath is censored here.

Along with stunning site of Gundrak, Zindari also detects the last living god (except Har’koa). He’s trapped, and Zindari sneaked and picked all the locks that kept him in chains.

The enraged beast god Akali smashed the whole lot of troll in front of the temple. Unluckily reinforcements from the palace arrived and killed the poor thing.

The last prophet was not defeated easily. It took Har’koa’s help too, but Zindari finally stabbed him in the heart. Drakkari down – hope she will never see them before.

With blood washed from her hands in snow, Zindari made a last round flight to take some pictures with a goblin camera, provided by Schlitzchen. That’s something she will show to her tribe at home back in Echo Isles.

And although a message from the warchief came, Zindari couldn’t help but make one last return to Grizzly Hills and take a picture of an ancient dwarf city. 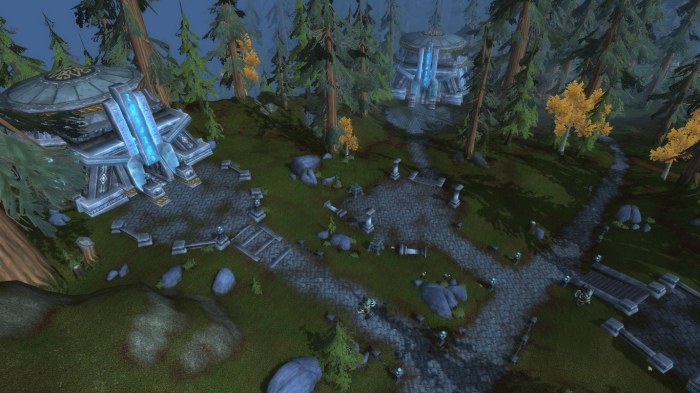